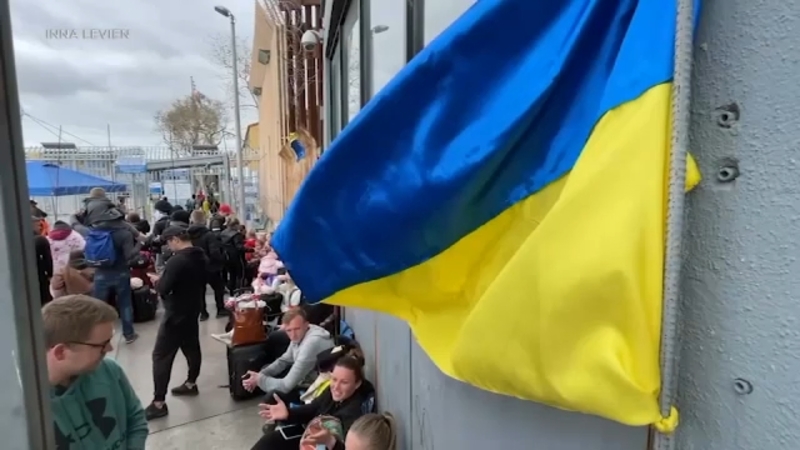 SAN DIEGO, Calif. (KABC) -- A group of Orange County moms headed to the U.S.-Mexico border this week to help give humanitarian aid to Ukrainian refugees waiting to enter the United States.

Lisa Harvey said when she arrived early Wednesday, she found families exhausted as they waited after fleeing the war with Russia-some traveling more than a month.

Harvey was joining a group of OC moms organizing aid.

"She called me. She said, 'Lisa, you got to see what's going on. There's not enough volunteers. There are hundreds of people. People are sleeping on the ground. People are angry. People are crying. They need emotional support,"' Harvey said.

David Miramontes with House of Ukraine said many refugees have followed information on social media leading them to San Ysidro.

"I asked them, 'Why not go to El Paso? Why not go to Laredo? In social media, they're telling us that they're being turned around in other ports of entry,'" Miramontes said.

Volunteers estimated the refugee total by Friday afternoon here to be at about 1,000-each with a story to tell.

One picture at a time, Inna Levien of Orange County shared their stories.

One of her photos was of a young girl holding a Ukrainian flag in one hand and American flag in the other.

"I just turned around and she was waving two flags. It was so symbolic because the Americans were playing with Ukrainian kids- zero language overlap. They don't speak each other's languages, but they found common language in laughter and play," Levien said.

Attention and care for children were some of their greatest needs Friday, along with volunteers to shuttle refugees into San Diego, translate and help organize humanitarian efforts. Those able to provide legal assistance or counseling were especially needed.