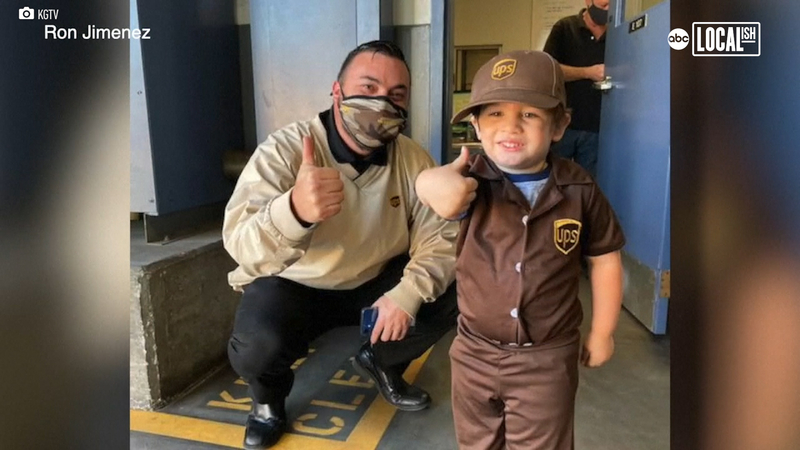 CHULA VISTA, Calif. -- Most people get excited when they see a UPS truck pulling up because it means a package is arriving. However, for one little boy, it's not the packages, it's the big brown trucks themselves that bring joy.

Clarissa Alcazar and her son Marco routinely run along a route that is near a UPS hub in Chula Vista, CA. Marco began waving to drivers every day along the run. One of those drivers was Ron Jimenez, who started to notice Marco in the last few months.

"He's usually in the same place so as we drive out. We honk, we wave, say hola!" says Jimenez.

Marco loves the UPS trucks so much, he now has UPS clothing, a little uniform, even pajamas. After visiting the hub and driving their toy truck, the employees decided to give him a truck of his own.

"They gave it a complete overhaul. Repainted it, put all our emblems and stickers all over it. The truck number is actually Marco's birthday," Jimenez says. "To see somebody who's appreciative of us and give us a kind smile and a wave that starts our day off with just a bang, and it brings hope back to us," he continued.

"Every time I have that thought, I get emotional about it," says Marco's mother. "He is so special to me that being able to share him with other people and give them joy, it's just, I have no words to describe how awesome that is."
Report a correction or typo
Related topics:
localish inspireviral videotoddlergood newsupslocalishbe kindall good news
LOCALISH
Moonshot Compost turns your food waste into nutrient-rich compost.
The new St. Pete Pier is the crown jewel of this Florida city
Meet the Dumpling Dudez!
Beyond June: Apparel company celebrates Pride all year
TOP STORIES
Blink-182's Travis Barker reportedly hospitalized in LA
Father, 10-year-old son found dead next to car in Chatsworth
Justice Stephen Breyer announces when he will leave Supreme Court
SoCal teen praised after finding lost purse, tracking down owner
93-year-old Moreno Valley homeowner shoots, injures intruder
Trump WH attorney disputes Hutchinson testimony about handwritten note
ESSENCE Festival of Culture 2022: What to expect this year
Show More
Shooting suspect barricaded inside South LA apartment complex
Workers fired for not joining company's daily Christian prayer: EEOC
R. Kelly sentenced to 30 years on sex trafficking conviction
LA business owner frustrated over incidents involving homeless
Trans Chorus of Los Angeles celebrates 7th musical anniversary
More TOP STORIES News