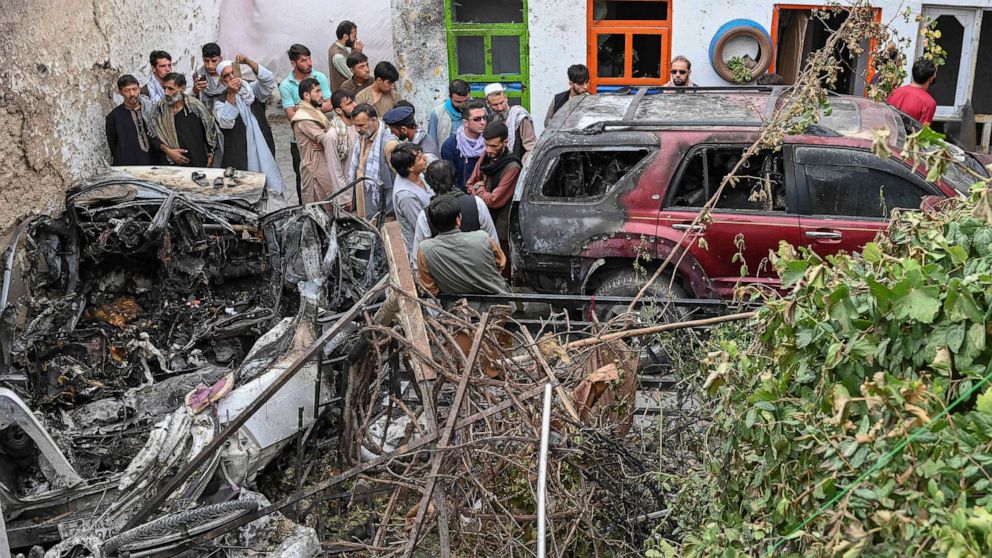 The U.S. military continues to review the Aug. 29 drone strike in Kabul that it said prevented a car bomb attack on U.S. troops and Afghan civilians at the airport in Kabul, but new questions continue to be raised about the strike in the wake of New York Times interviews with residents and relatives that indicate the driver targeted in the missile strike may have been a worker for an American aid agency.

On Monday, Pentagon spokesman John Kirby would not address specific questions about the drone strike but confirmed that U.S. Central Command is conducting an assessment of that drone strike.

However, it appeared that the CENTCOM assessment might not include sending American investigators into Kabul to get first-hand accounts from neighbors and families.

"I'm not going to get ahead of what CENTCOM is doing with their assessment of that strike," Kirby said at a Pentagon news briefing. "I am not aware of any option that would put investigators on the ground in Kabul to complete their assessment."

Kirby said the air strike had prevented an imminent attack at the airport "and nothing's changed about that view."

"I have nothing to speak today that alters the view, CENTCOM is conducting our assessment, and I think we need to let them finish that work," said Kirby. "We'll be as transparent as we can at the end of it, but I have no additional context to offer today."

The drone strike occurred days after the deadly suicide bombing at the airport, blamed on ISIS-Khorasan. Thirteen American service members and 170 Afghan civilians were killed.

It came at a time when U.S. officials were on high alert that another ISIS-K attack at the airport was imminent.

Accordingly, on Aug. 29, the movements of a white sedan were tracked for hours by U.S. military drones after it left a known ISIS-K safe house and it made its way through various Kabul neighborhoods, according to the New York Times.

The car's movements raised suspicions that it was the vehicle intended to be used in a car bomb attack, as described in ISIS communications intercepted by U.S. intelligence.

After the car's driver parked the vehicle in a residential courtyard, he and another man were spotted loading what appeared to be explosives into the vehicle a U.S. official told ABC News.

That action led military commanders to order that the drone fire a Hellfire missile at the vehicle to prevent what appeared to be the last steps before a car bomb attack on the airport.

U.S. Central Command later said in a statement that it was aware of reports that as many as 10 civilians may have been killed in the strike that it said had "disrupted an imminent ISIS-K threat to the airport."

"We know that there were substantial and powerful subsequent explosions resulting from the destruction of the vehicle, indicating a large amount of explosive material inside that may have caused additional casualties," said the statement. "It is unclear what may have happened, and we are investigating further."

The New York Times reported on Friday that interviews with neighbors and relatives indicated that the driver of the vehicle was not affiliated with ISIS but worked for Nutrition and Education International, a California-based NGO.

Additional information suggested the driver had been transporting colleagues to and from work and that an analysis of a security feed showed what the U.S. military interpreted as the loading of explosives may have in fact been the loading of canisters of water to bring home to his family, according to the newspaper.

Asked about the driver's potential links to the NGO, Kirby said he was "not going to get ahead of Central Command's assessment of this airstrike. "

"I think I need to let them complete their work," he added. "As I said earlier, the strike was taken to prevent an imminent threat to the airport."

Days after the drone strike Gen. Mark Milley, the chairman of the Joint Chiefs of Staff, had labeled the strike as "righteous" because it had followed protocols intended to prevent civilian casualties.

"We monitored that through various means, and all of the engagement criteria were being met," said Milley. "We went through the same level of rigor that we've done for years, and we took a strike."

"Because there were secondary explosions, there's a reasonable conclusion to be made that there was explosives in that vehicle," said Milley.

"We know from a variety of other means that at least one of those people that were killed was an ISIS facilitator," said Milley. "So were there others killed? Yes, there are others killed. Who they are we don't know. We'll try to sort through all that. But we believe that the procedures at this point -- I don't want to influence the outcome of an investigation -- but at this point, we think that the procedures were correctly followed, and it was a righteous strike."

At a hearing on Monday, Secretary of State Antony Blinken told the House Foreign Affairs Committee that no other country comes close to matching the precautions the United States does to minimize civilian casualties.

Blinken said the drone strike "is being looked at very, very carefully by others in the administration so we understand exactly what happened or didn't happen."

"We know that in the past, civilians have been hurt and killed in these strikes," said Blinken. "And we have to make sure we have in place every possible measure to allow us to continue to use the tool to defend ourselves while avoiding anyone on the civilian side from being hit.