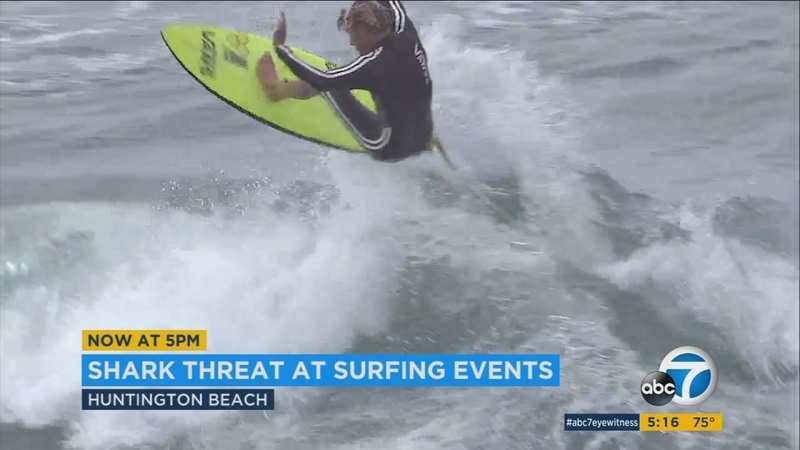 US Open of Surfing prepares for possible shark sightings

HUNTINGTON BEACH, Calif. (KABC) -- Two hundred of the world's best surfers are competing in Huntington Beach on Saturday, but with 18 shark sightings so far this year, precautions are being taken to make sure the nine-day event is safe.

The swell is building just in time for the U.S. Open of Surfing. The event forecast is one of the more promising in recent years.

"Our permit is causing us to have a couple of extra people on jet skis," said Lt. Claude Panis of Huntington Beach Lifeguards. "Routinely, on a daily basis, we have a lifeguard boat out, and they're asking us (to have) an extra set of eyes on the water if there's a shark sighting and also for rescue response."

About two weeks ago at the World Surf League's competition in South Africa, a shark in the line-up halted the heat and jet skis got the surfers out of the water.

It was the same spot two years ago when Mick Fanning had a close call with a shark that was live during the webcast. Simpson watched it from home.

"I pretty much went white. I couldn't even talk to my wife. I'm like, I couldn't believe what I was watching, you know...it was so scary," he said.

Huntington Beach has had 18 shark sightings so far this year and 36 last year.

"I've been competing here since I was 12, I'm not too worried," said Courtney Conlogue, a local pro surfer.

Conlogue, of Santa Ana, said having drones and extra eyes on the line-up allows the surfers to focus on the waves, not what's below the surface.

"All that WSL wants us to worry about is performing and letting us put our show on," she said.

For Conlogue and Simpson, two of the pros who will once again compete at their home break, they're hoping to surf their best before their friends, families and fans.

"I'm really looking forward to having the opportunity and hopefully get through some rounds and get a keeper result here," Conlogue added.