USC doctors use power of poetry to help cancer patients heal: 'We want this movement to spread'

USC researchers are studying the effects of art in treating cancer and the program has been helpful to health care workers, too.
KABC
By Denise Dador 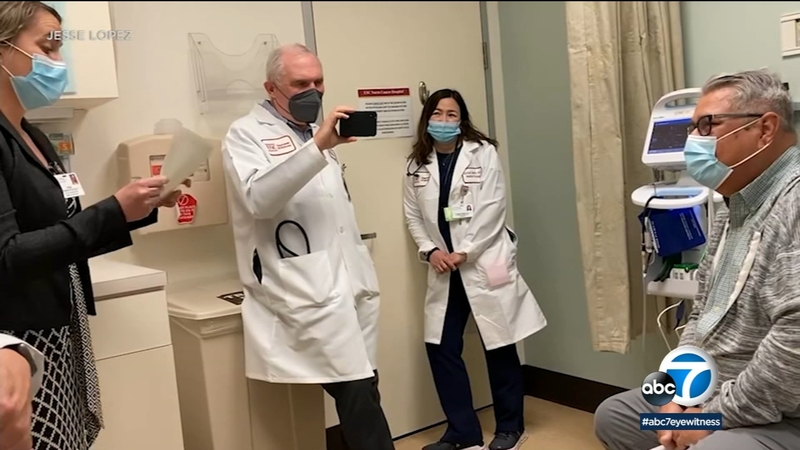 LOS ANGELES (KABC) -- Throughout the pandemic, medical staffers have faced extraordinary challenges, but one local doctor has found a way to connect with his patients in a heartfelt and deeply personal way.

He and his staff have been using the power of poetry to help their patients heal.

"It creates an intimate bond between my patients, myself, as well as the caregivers," Pinski told Eyewitness News.

The verses persuade patients to look inside themselves to find strength.

"I want cancer patients who watch this to know that they are so much greater than this diagnosis," said USC Norris Comprehensive Cancer Center program manager Viva Nelson. "They are individuals with identities that deserve to be celebrated."

Not only is she helping expand the program, Nelson also dabbles in writing verses herself.

"We want to reach as many patients as possible. We want this movement to spread," she said.

She recently wrote one about one of her patients, which she said helped capture his positivity and his love for motorcycles and renewable fuels.

USC researchers are studying the effects of art in treating cancer and the program has been quite healing for health care workers as well. The hope is that other hospitals will follow.

"This is not just making patients feel good, but there's also the potential for improving patient clinical outcomes as well," Pinksi said.

For cancer patients like Lopez, his philosophy on life is captured in his poem and it's fueling his soul.

"It reminds me that I have a lot to live for," he said.

USC's Institute of Arts in Medicine program also offers poetry writing and musical therapy programs to help patients through their cancer journey, but funding took a big hit during the pandemic.

To learn more on how you can support USC's Institute of Arts in Medicine, visit the USC donation website.

Though the expanse before you sure is wide,
Enough to get lost amid all that's supplied,
Of scenery and landscapes - past which we'll glide,
Smooth as ever, vroom, vroom!
(Jess is driving, that's why!)
Come on, let's get going, lots to cover this time.
That you'll soon be impressed cannot be denied,
Nor that wind on your cheeks will soon turn them to chimes
First, we'll need to fuel up.
Where's the best place to go?
We don't want to end up in need of a tow.
What's that you say?
What don't I know?

It's filled to the brim and will never get low?
What kind of Harley bizarrely gasses up on its own?
Runs on what, you say, and often overflows?
Oh! Optimism, renewable, boy am I slow!
Ok, you guys, let's get this show on the road,
Or should I say, rather, hit the road for a show?
One of the first Chief Inspectors in the state of CA,
Who's Mexican American, so much to convey.
Of accomplishments -he has quite the display!
Attended college at a more mature stage,
Showed that education deserves any age.
Great genes, he has too, parents alive to this day,
And his grandma - 102 - before she passed away.
First gen Californian, with a mother, adorin' -
Herself foreign, for Mexico, she was born in.
Father from Colorado, and both shared the fortune,
Of bringing into the world one so well proportioned.
In kindness and smarts, on charts he is soarin' -
And if resilience were measured, how high he'd be scorin'!
Flexibly as circus performers twist into contortions,
Whether at work or at home, each space he conforms in.
Engulfed by the present, like now,
Harley riding.
And in golf, on the field, he's sure to be smiling!
Loves BBQs much and on such he'll be dining!
Other days he'll be deep sea fishing,
So dive in! Vroom vroom
To the office

In the morning arriving,
Then later back home,
To keep his family thriving. Kids are now grown
And no doubt are striving
Toward an example set that's truly inspiring!
Many don't leave their jobs,
Regardless of timing,
Sit at dinner, minds distracted by work tasks that are piling
Jess knows how to pause, when it's time to stop trying,
To be there for those in need of his heart's supplying.
And, oh, what a heart has this man - it is vast!
Say, aren't you driving a little too fast?
Least he stopped dirt bike riding, as a matter of fact,
When his children were small, not wishing to crash.
Yes, indeed, he's a man of considerable tact.
Thinks always of others, before he acts.
Jess, of praise, you never will lack.
What Dr. Pinski said should be put on a plaque!
And Penny, your love, had quite the stack,
Of compliments, over the years, to unpack.
Beloved by many - you've made an impact.
Steady and stable, yet to much you adapt,
Though some roads prove tough to successfully pass.
That's why we're here to provide you a map,
Get you healthy and strong, and on the right track!
Thanks for choosing Norris! Know that we have your back!