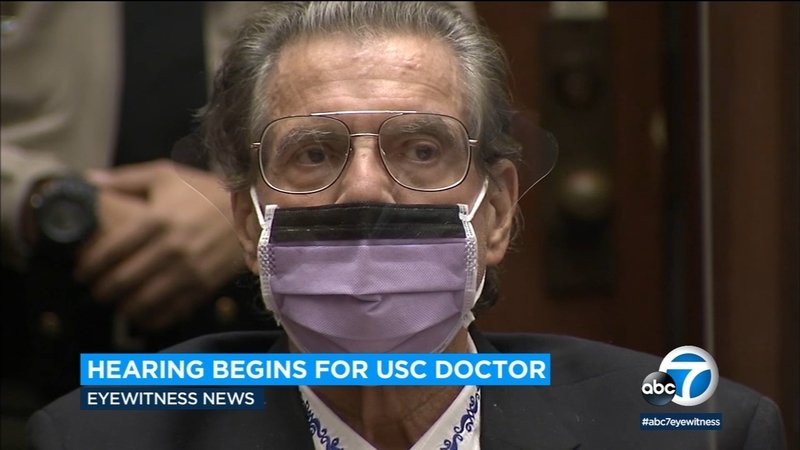 Prosecutors allege the crimes occurred between 2009 and 2016 involving students ranging in age from 17 to 31 who went to USC's student health center for annual examinations or other treatment while Tyndall was working there.

In March, attorneys representing hundreds of women who claim they were sexually abused by Tyndall announced an $852 million settlement of lawsuits against the university, describing the resolution as the largest of its type ever against a university.

In January 2020, a federal judge in Los Angeles granted final approval of a $215 million class-action settlement between USC and some of the women who claim they were sexually abused by Tyndall.

Attorneys representing hundreds of women who claim they were sexually abused by former USC campus gynecologist George Tyndall announced an $852 million "global settlement" of lawsuits against the university Thursday.

The settlement provides all class members -- about 17,000 former patients who received women's health services from Tyndall -- compensation of $2,500 and up. Patients who are willing to provide further details about their experience could be eligible for additional compensation up to $250,000.

The first two alleged victims called to the stand in Tyndall's preliminary hearing testified that they will each receive civil settlements -- one for $1.2 million and the other for about $1.6 million before her attorney's cut of the settlement.

"I was embarrassed and horrified that this was happening,'' one of the women told Los Angeles Superior Court Judge Larry Paul Fidler about her first examination by Tyndall in August 2014. "I was telling myself, You're just being sensitive ... He's a professional, he's not going to be doing anything weird.'''

The woman, identified in court only as Jane Doe 14, testified that she made it to the center's lobby before she started to cry and that it "felt wrong,'' but that she was convinced it couldn't be wrong because Tyndall was a medical professional.

She said that she had to make a return visit in June 2015 because she needed to renew her prescription for birth control and that Tyndall told her she needed a pelvic exam and a "well-woman'' checkup that included a breast exam and a skin exam during which he told her she had "beautiful, creamy skin.''

"I think I made it home before crying,'' she said of that visit with Tyndall, which she described as "worse'' than the first appointment.

The woman -- who said she had abnormal pap smear results -- testified that she declined a pelvic examination during a December 2015 appointment with Tyndall because she felt it was unnecessary to have one so quickly after the last.''

She said she didn't recall the doctor ever wearing gloves during the examinations and reported what had happened to her after reading a Los Angeles Times article about Tyndall in spring 2018, saying it was like a "checklist down the line of things I'd also experienced.''

Another alleged victim, who was 20 at the time in 2016, described staring at the ceiling as Tyndall examined her without a chaperone and asked if she played any sports.

"I felt uncomfortable,'' said the woman, who was identified in court only as Jane Doe 16. "It was really unpleasant.''

She said that she also came forward after reading the newspaper article about Tyndall.

"I don't think I could sleep at night if I wasn't saying something,'' said the woman, who is now herself an obstetrician-gynecologist.

The judge is expected to hear more testimony Wednesday and Thursday from alleged victims, with the hearing then set to go on hiatus before resuming some time next year.