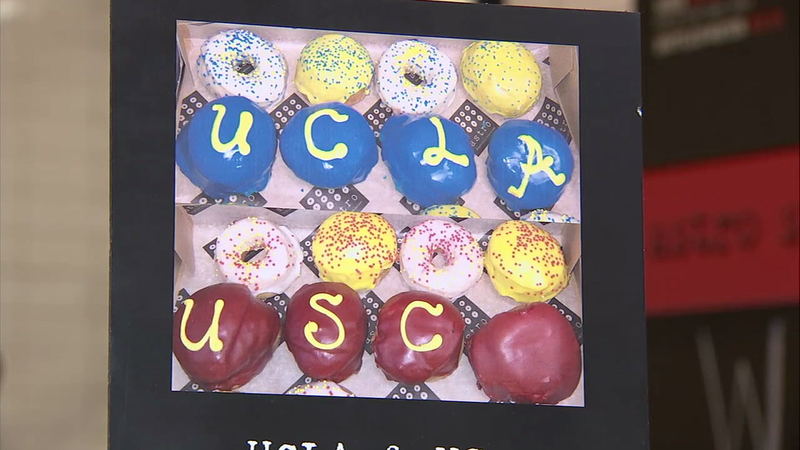 EXPOSITION PARK, LOS ANGELES (KABC) -- As the big game between USC and UCLA is less than 24 hours away, the L.A. Coliseum set up security in an effort to keep fans safe.

Tailgaters are expected to show up early when the USC campus welcomes fans from all over.

"Our gates open to the campus at 6 a.m., and we've got fans - primarily USC fans - who've been coming to the same location for decades. So it's going to be an extra big crowd tomorrow," said David Carlisle, assistant chief of the USC department of public safety.

The assistant chief said Los Angeles police and firefighters will be on hand during the game, along with the FBI. Plus the FAA will also be on hand for any flyovers scheduled.

The precautions are to keep fans from both universities safe, and that includes Matt Sullivan, who flew in from Dallas.

"It's probably two of the closest schools like in terms of covering an entire city, proximity and everything," he said.

Sullivan, who was wearing his school pride, isn't the only person who was born a fan of the crosstown rivalry.

"This is my team and I'm an L.A. native so go UCLA!" UCLA fan Jorge Sanchez said.

At the Grand Central Market, there was also a mother of a USC grad. But her sister graduated from UCLA and her daughter attends UCLA Lab School.
"I have to go, when I drop her off at school, I have to check my clothes and take off USC anything to make sure that I don't get comments and stuff like that," Sara Jean said.

If you're like that family and you have a divided home, Astro Doughnuts and Fried Chicken could be neutral ground.

The owner said no matter which team you stand behind - they've got a donut with the right team on it for you.

"I generally give my friends a sample and say, 'You guys work it out,'" Art Levitt said.

The Bruins are a 16-point underdog in this match-up.

Watch the UCLA Bruins take on the USC Trojans this Saturday on ABC7. Coverage of the game starts at 4:30 p.m.