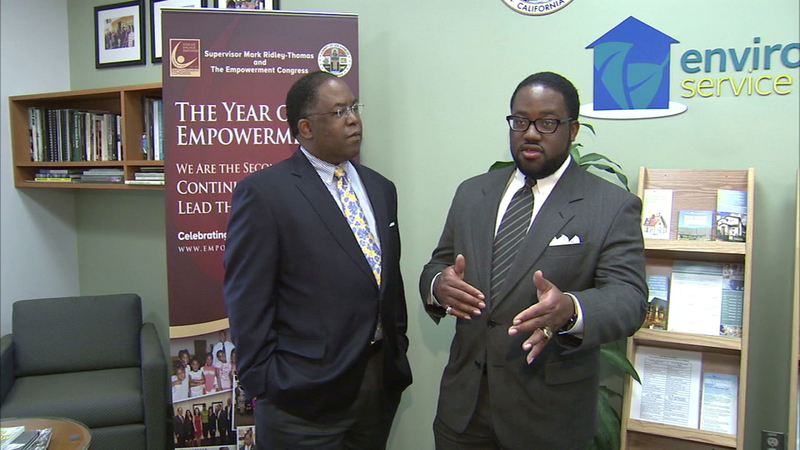 LOS ANGELES (KABC) -- The highest official at the University of Southern California has confirmed that he has requested a federal investigation into a $100,000 donation from County Supervisor Mark Ridley-Thomas.

The money made stops at several entities including the school before landing at a nonprofit headed by the supervisor's son, Sebastian Ridley-Thomas.

In addition, USC hired Sebastian Ridley-Thomas as a part-time instructor and awarded him a scholarship to pursue a graduate degree.

The transactions were first reported by the Los Angeles Times.

Financial records obtained by Eyewitness News reveal that the supervisor wrote the six-figure check out of his campaign fund called Committee for a Better LA.

The money then went to USC's Suzanne Dworak-Peck School of Social Work. Its dean, Marilyn Flynn, handled the next transaction.

Flynn then sent it to the next entity, United Ways California, designating it for a think tank called Policy Research and Practice Initiative. That is a nonprofit headed by Sebastian Ridley-Thomas.

Though the U.S. attorney has not opened a formal investigation the optics are not good for the supervisor according to Loyola Law School professor Jessica Levinson.

A statement released by the supervisor's attorney, Stephen Kaufman, says,"We do not believe that it raises any legal or ethical issues, and it had nothing to do with his son's scholarship or employment at the University."

The chair of USC's Board of Trustees, Rick Caruso, says in an internal letter that he alerted the U.S. attorney and disclosed that Marilyn Flynn is no longer dean of the School of Social Work.

"As a board, we are steadfast in the determination that we will not tolerate unethical behavior at USC and people will be held accountable."

The university also fired Sebastian Ridley-Thomas - a move which was swiftly condemned by his lawyer.

"We strongly believe USC's decision to terminate him was erroneous and precipitous. We are now actively considering legal remedies," stated the son's lawyer Lance Olson.

According to officials familiar with investigations of public funds, investigators will examine layers of transactions.