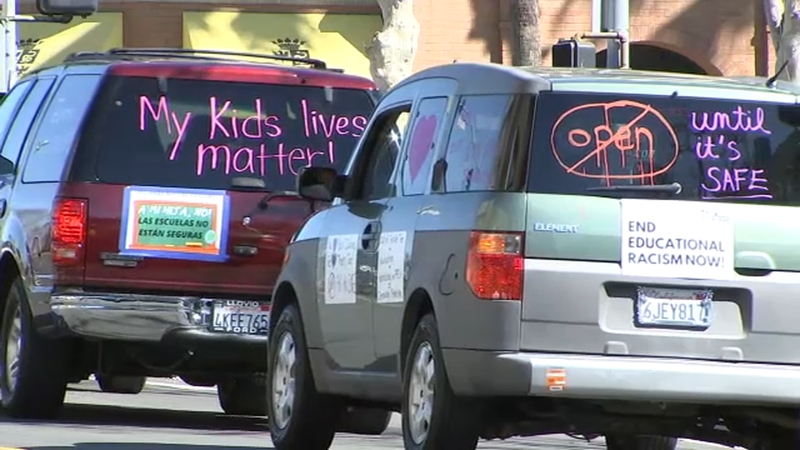 DOWNTOWN LOS ANGELES (KABC) -- Many elected officials and parents are pressuring teachers to get back on campus. Now Los Angeles Unified School District teachers are pushing back.

In downtown L.A. on Saturday, educators, parents and students gathered to voice their concerns by participating in a car caravan protest and rally. They said they were worried about reopening schools for in-person instruction before it is safe to do so.

Teachers said to go back to campuses would put their student's families at risk in communities already heavily impacted by the virus.

"There are families who live in one, two-bedroom apartments and there are at least five to six people there. It's extremely dangerous for us to potentially expose them," said Beth Clark, a 2nd grade teacher.

UTLA said its members will vote on whether they should refuse to report to work if the school district reopens its campuses too soon. The union said it wants to see L.A. County move out of the state's purple tier designation, indicating widespread transmission of the coronavirus, before in-person instruction resumes.

UTLA is also demanding vaccines for all educators.

On Friday, Gov. Gavin Newsom announced that California will soon be setting aside 10% of all of the first-round vaccine doses it receives specifically for teachers, educators and childcare workers.

The president of the Oakley Union Elementary School District Board of Trustees has resigned and she and other members were caught on video making disparaging comments about parents.

The change will start on March 1, Newsom said, with a beginning baseline of at least 75,000 doses a week.

Teachers and childcare workers are already being prioritized to receive the vaccine in California and can already sign up to receive the Pfizer or Moderna vaccine.

UTLA and the California Teachers Association said Newsom's announcement was a step in the right direction but did not signal that it would be enough to get teachers back into classrooms.

"We don't feel that our communities of color are there, to open, yet," said Jazmin Garcia, a parent who attended the rally in downtown L.A. "We feel like it's a rushed approach. And we've been very impacted, which is why we're out here."