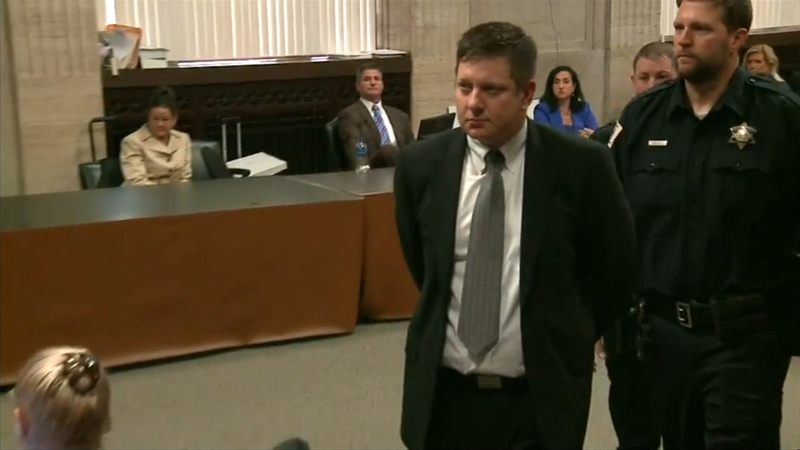 Van Dyke was charged with first-degree murder, 16 counts of aggravated battery with a firearm - one for each shot - and official police misconduct.

Aggravated battery with a firearm carries a sentence of six to 30 years per charge.

Police encountered McDonald after a 911 call reported someone breaking into vehicles. As Van Dyke arrived, police had the 17-year-old mostly surrounded on a city street. An officer with a Taser was just 25 seconds away.

On Friday morning, the jury sent the court a note asking on the aggravated battery charges whether to consider the order of the shots or just the total number of shots.

During the trial, the medical examiner testified that she could not determine the order of shots in the autopsy findings, but showed the jury each bullet wound from head to toe, and what effect it had on Laquan McDonald as he died.

The judge instructed jurors to only consider the simple number of shots fired.

Van Dyke claimed he opened fire on the 17-year-old who was holding a small knife because he feared for his life and continued to fire after McDonald was on the ground because he believed he was still a threat.

Prosecutors have argued that each shot was a crime and each shot robbed McDonald of the chance of survival and that every moment of his life mattered.

The lead defense attorney for Jason Van Dyke made closing arguments before the trial in the police officer's trial.

"I would say guilty," one alternate said when asked which way they were leaning. "He should have waited longer. I mean, he knew the Taser was coming. That's what did it for me."

"Where was he actually causing an issue that, you know, Jason Van Dyke thought that he needed to use deadly force?" the other alternate juror said. "I just don't understand that."
TIMELINE: Laquan McDonald Shooting, Jason Van Dyke Case

During closing arguments Thursday, prosecutor Jody Gleason pointed to dashcam video of Van Dyke shooting McDonald 16 times as the teenager held a knife at his side. She noted that Van Dyke told detectives that McDonald raised the knife, that Van Dyke backpedaled, and that McDonald tried to get up off the ground after being shot.

But Van Dyke's attorney, Dan Herbert, said the video, the centerpiece of the prosecutor's case, doesn't tell the whole story and is "essentially meaningless based on the testimony" jurors heard. He pointed to testimony from Van Dyke's partner that night, Joseph Walsh, who said he saw McDonald raise the knife, even though the video doesn't show that. Van Dyke made similar claims on the witness stand as he told jurors that he was afraid for his life and acted according to his training.

"The video is not enough," he said. He added: "It shows a perspective, but it's the wrong perspective."

Herbert did not note that Walsh is one of three officers charged with conspiring to cover up and lie about the circumstances of the Oct. 20, 2014, shooting to protect Van Dyke. Jurors were told only that Walsh was testifying under "use immunity," meaning his testimony can't be used against him as long as he was truthful, but were never told about the allegations he faces.

Gleason seized on the testimony of one the defense's own witnesses, a psychologist who interviewed Van Dyke. Dr. Laurence Miller said that when Van Dyke heard on his radio that McDonald had a knife and had punctured the tire of a squad car, he told his partner: "Oh my God, we're going to have to shoot the guy."

Gleason said Van Dyke had made up his mind about what he'd do before even arriving at the scene.

"Laquan McDonald was never going to walk home that night," she said.

Gleason told jurors that while police officers are allowed to use deadly force in some circumstances, this was not one of them.

"They do not have the right to use deadly force just because you will not bow to their authority," she said. "This is not the Wild West out here ... where an officer can shoot an individual ... and try to justify it later."

The jury, which deliberated for about seven hours total on Thursday and Friday, is comprised of eight men and four women. Seven are white, three are Hispanic, one is Asian-American and one is African-American.

One of the last images prosecutors showed jurors was an autopsy photo of McDonald's body. Gleason noted bullet entry and exit holes.

"Laquan's body was riddled, broken and bleeding," she said. She added: "He even had bullet fragments in his teeth."

Herbert argued that McDonald was to blame for what happened that night, saying "the tragedy ... could have been prevented by one simple step." Herbert then dramatically took the knife that was entered into evidence earlier and dropped it on the floor in front of the jury box. Van Dyke testified that he repeatedly asked the teen to drop the knife.

Herbert also reminded jurors that a prosecutor briefly mentioned the issue of race during opening statements but never broached the issue again.

"Did you see any evidence that race had anything to do with this case?" he said. "When you don't have evidence, you use argument."

As jurors began deliberating, the Chicago Police Department canceled days off and put officers on 12-hour shifts. An extra 4,000 officers will be on the street, according to spokesman Anthony Guglielmi. The city saw protests after video of the shooting was released in November 2015, and activists have been planning how they might react to a verdict.

The verdict will be the latest chapter in a story that has led to the police superintendent and the county's top prosecutor both losing their jobs - one fired by the mayor and the other ousted by voters. It also led to a U.S. Justice Department investigation that found a "pervasive cover-up culture" and prompted plans for far-reaching police reforms.

When attorneys and Van Dyke were called back to court for the jury question Thursday, Van Dyke broke down before the judge, explaining he was late returning to court because his child was being threatened.

On Friday morning, Judge Vincent Gaughan interrogated Officer Van Dyke and his attorney Dan Herbert in a very testy exchange in court. The issue stems from Thursday when attorneys and Van Dyke were called back to court when the jury had a question and Van Dyke was nowhere to be found for a period of time.
WATCH: Prosecution makes closing arguments, rebuttal closing arguments
EMBED More News Videos

Van Dyke was emotional, explaining he was late returning to court because his daughters were threatened at school. Judge Gaughan demanded more information to determine if the threat was credible or else he was thinking of revoking bail.

The lead defense attorney for Jason Van Dyke made closing arguments before the trial in the police officer's trial.

Dan Herbert: "High school kids were walking around the school saying, 'Which one is Jason Van Dyke's daughter because we are going to get her at school. So that wasn't enough."

Judge Gaughan: "Who was a witness to this?"

Herbert: "The school for one."

Judge: "So you're going to bring the building in? C'mon."

Herbert: "Judge this is a real threat."

Judge: "I mean you're not making sense the way you're talking like this."

Herbert: "The school thought it was a threat so they pulled the daughter into the police room because not only are they saying they're going to attack his daughter, then they start passing out pictures so that all of these kids could find out who his daughter is so they can attack her. So yeah, I think that's a threat judge."

The judge decided to let it go and didn't revoke bail. It's unclear if the students making the threats were ever tracked down.

Meanwhile, the jury got the transcripts they requested from Van Dyke's former partner, Joe Walsh He was with Van Dyke the night of the Laquan McDonald shooting.

When he took the witness stand back in September, he told the jury that McDonald made no aggressive acts while he was being followed by police, but the officer was concerned the 17 year old was a threat to the public as he was holding a small knife.

No matter what the verdict is in the Jason Van Dyke trial, Mayor Rahm Emanuel says the city is ready.

The entire city is gearing up for the verdict.

Mass protests are already being planned should there be anything less than a murder conviction, and Chicago police are working extended hours, gearing up for any outcome.

Groups of community activists and South Side business owners gathered Thursday night to prepare for what they plan to do after the jury's decision. Some activists said if it's not guilty or a hung jury, they ask Chicagoans to take their frustrations to City Hall.

"As a leader, I am not asking that we tear down our communities, but Chicago and all across America needs to know that this is not acceptable," said community activist Aleta Clark.

In response to the upcoming verdict, the police department has officers working 12-hour shifts and cancelled days off.

Several empty CTA buses are parked outside Chicago Police Headquarters in order to quickly transport officers around the city.

Several empty CTA buses are parked outside of #CPD police headquarters to transport as many officers as quickly as possible to wherever they are needed today as the jury continues to deliberate in the Jason Van Dyke case: #JasonVanDykeTrial pic.twitter.com/BBnpO9JdZI

Although many church leaders say they want peaceful protests, activists said they are willing to go to jail to have their voices heard.

Mayor Rahm Emanuel said that he remains confident not only in the plan put together by Superintendent Eddie Johnson, but also in the residents of Chicago that they will respond appropriately.

"I hope that everybody heeds the advice of Laquan McDonald's family, the pastors, the community leaders to make their message heard and what they have to say and do it in a way that is respectful to the city that we all call home," the mayor said.

Speaking at a breakfast meeting Friday morning, Emanuel was not only looking ahead to the verdict, but also to the healing the city still needs from the wounds the Laquan McDonald shooting has caused.

"Whatever the verdict is, our work as a city is not done in bridging and helping build community relations between the police department and the residents of the city of Chicago," Emanuel said.