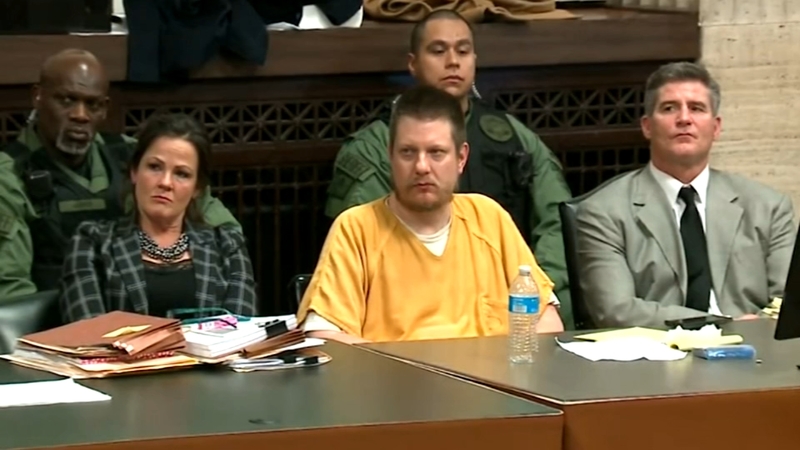 In 2014, Van Dyke shot the black teen 16 times. Video of the shooting from a police dashboard camera, released more than a year later, was a key piece of evidence in the trial and inflamed public reaction across the country.

In October, jurors took a few hours over two days to determine their verdict. Van Dyke was found guilty of second-degree murder and 16 counts of aggravated battery.

Judge Vincent Gaughan said he considered the most serious charge to be the second degree murder charge, not the 16 aggravated battery charges, and made his sentencing decision on that murder charge.

The special prosecutor argued that aggravated battery with firearm was the more serious of the crimes of which Van Dyke is convicted and should be sentenced consecutively on those charges instead of the second degree murder charge, which carries a lesser sentence.

The prosecution asked for 18 to 20 years in prison. The defense asked for probation. Van Dyke's sentence is eligible for reduction for good behavior, and ABC7 Legal Analyst Bob Milan said the former police officer could be out in as little as three years.

Jason Van Dyke's family seemed relieved when his 6 year, 9 month sentence was handed down. Laquan McDonald's family and the activsts who worked t bring the shooting to light were d

"The defense won the battle. But Joe McMahon and the special prosecutor team they won the war. They convicted for the first time, in Chicago history, they convicted an officer in the line of duty regarding a shooting that took somebody's life." Milan said.

"I've been told time and time again that the citizenry of the county of Cook is not going to be satisfied with a sentence that's anything south of 20 years," said Hunter said. "However I want to say to everyone - everyone in the city of Chicago and across this country - that if they had sentenced him to 1 minute, it is a victory. It is a victory because what has happened in this courtroom today has never happened in the history of this county and it sets a precedent and it sends a strong message to unjust police officers that now you can and will go to jail if you're caught lying, if you're caught breaking the law."

Hunter earlier read a message to the judge as if it was written by his great nephew, saying "I am no longer here to speak for myself." It created a powerful image of the one person who this trial is based around, who has been unable to show his face in court for one very obvious reason.

Special Prosecutor Joe McMahon expressed some disappointment in the sentence, saying "no sentence will bring back Laquan McDonald or undo the hurt to his family and friends, just like no sentence will fix the concerns of the African American community in this city" and other cities in the state and country. However, he said he did view it as justice.

"I understand that this sentence is not everything that the McDonald and the Hunter family wanted. I just spoke with Laquan's mother. It is still as difficult today as I think it was for her over four years ago when her son was murdered. But this sentence, like the verdict on Oct. 5, does hold this defendant accountable," McMahon said.

"This sentence, like the verdict on Oct. 5, does hold this defendant accountable," prosecutor says after sentencing of Van Dyke, acknowledging that it's not "everything the McDonal

Defense attorney Dan Harmon said his team was pleased with the verdict, though they had obviously been hoping for probation.

"He truly felt great. he was not just relieved. He was happy," Jason Van Dyke's defense attorney said of his client after sentencing Friday.

The mood in the courtroom was tense before Judge Gaughan handed down his sentence. Van Dyke's wife Tiffany clutched the hand of a nun, who in turn clutched a rosary. Activists sat on the edge of their seats, hoping the sentence would be a statement against police.

When the actual number was announced there was a pause, a suspended moment in which everyone was doing the math to convert 81 months into years, before they could really react. Van Dyke's family appeared relieved. The activists were disappointed and, as they left the courtroom, increasingly angry about what they see as an unjust sentence.

"We're devastated, we're heartbroken, but we're not giving up," said activist William Calloway, who worked to bring McDonald's murder to light. "That's a slap in the face to us and a slap on the wrist to him."

Van Dyke entered the courtroom in a yellow jumpsuit with a filled-in beard, his hands crossed behind his back as he faced the judge.

His family, wife Tiffany and children, walked into the Leighton Criminal Courthouse surrounded by law enforcement. The weight of the proceedings was clearly visible on their faces.

Through intense tears Tiffany van Dyke says of fear of her husband going to prison “my biggest fear is that somebody will kill my husband for something he did as police officer... for something he was trained to do. No malice, no hatred, simply a man doing his job.” @ABC7Chicago

"I receive one phone call a day to hear my dad's voice. My family has to drive three hours only one day out of the week to only see him for one hour," she told the court. "The last time I hugged my dad or gave him a kiss goodbye was on October 5, 2018. Now I touch his hand through a dirty piece of glass."

One of Van Dyke's attorneys read a letter from his 12-year-old daughter to the judge. His wife Tiffany gave extended, often tearful, testimony about the impact his conviction and incarceration has had on her and their family.

Van Dyke read a short statement on his own behalf after closing arguments were presented.

"I have prayed daily for the soul of Laquan McDonald and it was due to my actions that the McDonald family has suffered," he said.

The special prosecutor called to the stand several men who had filed complaints against Van Dyke as an officer. Vidale Joy said Van Dyke approached him with his gun drawn and used racial slurs. Jeremy Mayers said Van Dyke used one hand to choke him.

Edwin Nance wept through most of his testimony, recounting three surgeries and constant pain since Van Dyke handcuffed him in 2007. Nance won a civil rights lawsuit against Van Dyke.

A man pulled over by Jason Van Dyke in 2005 says then Officer Van Dyke held a gun to his temple calling him “a black ass n - - - - -!” He is testifying that he got a ticket for no tag but the ticket was dismissed. #VanDyke #LaquanMcdonald In the sentencing hearing for Van Dyke.

Another man now testifying that during a traffic stop then Officer Jason Van Dyke choked him while hand cuffed because he wouldn’t spit out a cough drop. #VanDyke #LaquanMcdonald @ABC7Chicago

Chicago mayoral candidates Toni Preckwinkle, Paul Vallas and Lori Lightfoot were all in attendance at the hearing. All three expressed surprise and disappointment at the brevity of the sentence.

"Jason Van Dyke was convicted of murder of Laquan McDonald and that's the first officer in 50 years in the city of Chicago to be convicted of murder," Preckwinkle said. "I don't believe he's the first officer in 50 years to murder one of our residents. So I'm grateful that he was brought to justice. I would have expected that having been found guilty there would have been a more lengthy sentence."

"I'm surprised that the sentence was so short and I think it should have been a longer sentence, period," Vallas said. "This is what happens when you don't have effective leadership."

"This raises questions about what is the value of a black young man's life," said Lightfoot. "He clearly had a range of options that he could choose, he chose the low end, and that's a disappointment."

Mayoral candidate Amara Enyia released a statement saying, in part, "Today's sentence makes it even more difficult to make the case that our city is truly invested in repairing relations with the community when our justice system seems to exhibit a perpetual disregard for the voices and opinions of those very communities. We knew that there would be no winners in this case, but this sentence and yesterday's acquittal of the officers involved in the coverup show just how far our city, and our nation, has left to go when it comes to issuing real justice to those who deserve it most."

Mayoral candidate Bill Daley released a statement saying, in part, "The appearance of a lenient sentence is a problem at a time when we desperately need to rebuild trust between people and police. We must learn from these situations and work together to repair the relationship between the police and the communities they serve."

Patti Blagojevich, wife of former governor Rod Blagojevich, tweeted about the sentence, expressing anger that Van Dyke will serve less than half of what her husband was sentenced to.

I am speechless. An unarmed 17 year old is dead and the sentence is less than half of my husbands sentence for discussions with his staff and attorneys about political fundraising.@realDonaldTrump

There were demonstrators earlier in the day, but no protests materialized outside the courthouse after Jason Van Dyke was sentenced.

At 4 p.m. demonstrators who had come out to the courthouse where Van Dyke will be sentenced had left the area. Earlier a wide array of protesters were outside, totaling about 30 people at their peak, including about 25 from the Revolution Club Chicago.

Chicago police officers kept an eye on the demonstrations but no problems or issues were reported.

Among the demonstrators were several mothers of sons who had been shot and killed by police in Chicago and Zion. They said they felt a very personal connection to the McDonald case.

"Ninety-six years. That'd be the minimum that I want to come out of here. That would look like justice to me. To me, he deserves life. A life for a life," said LaToya Howell, whose son was killed by Zion police.

"If he gets off it would be a slap in the face. If he get justice-- if we get justice then I know there's a chance I can get justice in my son's case against the police," said Chantell Brooks, whose son was killed by Chicago police.
Report a correction or typo
Related topics:
chicagolooparcher heightssentencingmurderpolice shootingdashcam videojason van dykelaquan mcdonaldchicago police department
Copyright © 2022 WLS-TV. All Rights Reserved.
TOP STORIES
What does Supreme Court decision on abortion rights mean for CA?
Supreme Court overturns Roe in landmark case on abortion rights
Guilty plea entered in OC DUI crash that killed couple
LA County indoor mask mandate may not happen until July. Here's why
Brian Laundrie confession letter released: 'I ended her life'
Where abortion stands nationally: State-by-state breakdown of laws
How does overturning Roe v. Wade affect IVF treatments?
Show More
Man injured in Westlake District hit-and-run speaks out
Congress sends landmark gun violence compromise to Biden
Murder suspect arrested after dispute ends in shooting in Hollywood
How personal data could be used to enforce anti-abortion laws
Van Nuys sisters killed in Guatemala violent car crash
More TOP STORIES News