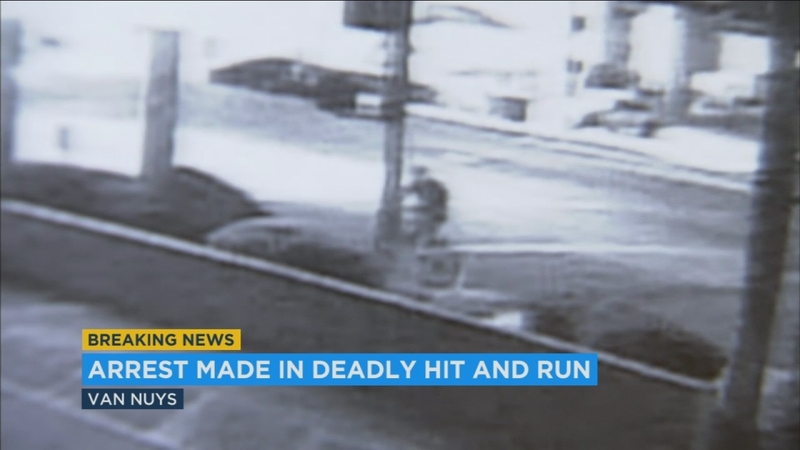 VAN NUYS, LOS ANGELES (KABC) -- A woman in her 50s died late Wednesday evening after she was struck by two hit-and-run drivers on a street in Van Nuys, authorities said. One driver has since been arrested.

The incident took place about 11:20 p.m. at the intersection of Sepulveda Boulevard and Stagg Street, where the victim was in a crosswalk, according to the Los Angeles Police Department.

Surveillance video acquired by detectives showed a vehicle striking the woman as it made a turn at the intersection where the the incident took place. The driver of the first was identified as 24-year-old Eric Limon. He has been arrested.

A witness stopped after the initial collision and said the victim was then struck by a gold older-model Toyota Camry. The second driver - believed to be a woman - fled the scene and remains on the loose.

The unidentified woman was pronounced dead at the scene.

"For anybody that can provide us leads that would lead to the identification, arrest and conviction of that driver or drivers may be entitled to" a $50,000 reward, said LAPD Detective Bill Bustos. "So if anybody knows what happened here ... we encourage them to please contact the Los Angeles Police Department."
Report a correction or typo
Related topics:
los angelesvan nuyslos angeles countyhit and runlos angeles police departmentlapd
Copyright © 2022 KABC Television, LLC. All rights reserved.
TOP STORIES
Man accused of fatally stabbing UCLA grad student arrested
Voting bill collapses, Democrats unable to change filibuster
LA County sees 94% jump in homicides in 2 years, LASD stats show
TX mom pregnant with 6th child dies from COVID complications
Increase in SoCalGas bills a shock to some local customers
Homeowners 'wasting water' will get more than a fine, officials say
Vice President Kamala Harris to visit San Bernardino on Friday
Show More
COVID-19: 59 new deaths in LA County, positivity rate at schools drops
Man charged in attack on OC vaccine-clinic workers
Starbucks no longer requiring US workers to be vaccinated
Cardi B offers to pay for funerals of all 17 Bronx fire victims
Man sentenced to life in prison for violent crime spree in LA County
More TOP STORIES News