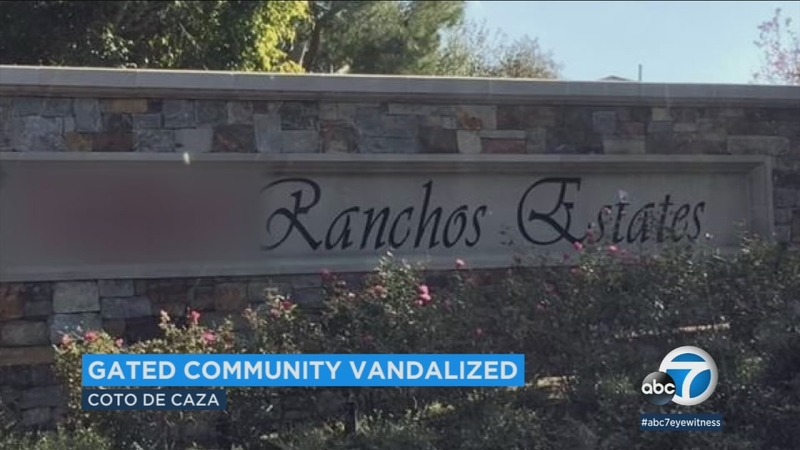 COTO DE CAZA, Calif. (KABC) -- Residents in the affluent neighborhood of Coto de Caza in Orange County were outraged to see a racial slur spray painted on one of the propertys' landmarks Thursday morning.

Another derogatory word referring to the LGBT community was found on a second wall.

Residents said the Master Home Association on the property is fast to act on any issue and found it difficult to understand why it took until Friday afternoon to clean the graffiti.

"Having to keep your kids' face straight as we pass this sign. All my kids are reading (and saying) 'Daddy what does that mean?'" Riggs shared.

One neighbor said she contacted the Orange County Sheriff's Department and was told she could not file a report because the tagging was not done on her personal property.

"If the red letters that were written on the wall had said to kill the N-person, then perhaps they would come out and make a big deal of it. But because it didn't, it was not that big of a deal," resident Sonya Weaver-Johnson said.

In response, Lt. Mark Stichter, of the Orange County Sheriff's Department, said, "We've been researching that and trying to determine the specific times that were given to us...We haven't found anything to our dispatch center."

Officials with the sheriff's department said they were never notified by the property and only learned of the issue Friday.

"We'll be investigating it to the fullest to try to determine exactly who may have...written that," Stichter said.

Though the spray paint has been scrubbed off, residents complained the damage has already been done.

"This is where character shines and our silence speaks louder than our words," Riggs said.