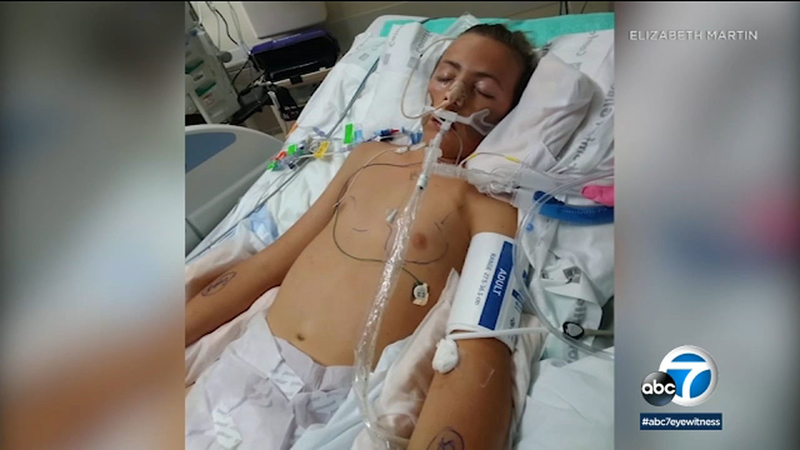 LOMA LINDA, Calif. (KABC) -- A teenager from Desert Hot Springs has spent the last five weeks in the hospital, after life-threatening complications believed to be caused by the use of vaping devices, commonly known as vaping.

Doctors say it almost cost him his life.

"I liked how it tastes. It tastes like doughnuts," said 15-year old Zane Martin from his hospital bed inside Loma Linda University Children's Hospital.

Martin said he first started vaping only a few months ago, when a friend at the local skate park introduced him to it. His symptoms started with difficulty breathing, and only got worse from there.

"The next day I tried to get up to go take a bath, and I couldn't stand on my leg," said Martin. "It felt like it was going to snap."

His mother said he went from being a perfectly healthy boy to being in a medically induced coma in a matter of days. Doctors said his condition was life-threatening.

"When he came in he was so close he almost had to go on a heart-and-lung machine," said Dr. Jui Shah at Loma Linda University Children's Hospital, who said she believes the inflammation in his lungs was caused by electronic vaping.

It's not immediately clear what kind of product Martin was vaping. He told the hospital that it was a wax cartridge of THC that he bought from a friend for $25. Still, Loma Linda University Health says it's not entirely relevant how and where these products were purchased, because the liquid that's ingested through vaping devices is not regulated by the FDA anyway.

"The Centers for Disease Control are deeming vaping as a new epidemic," said Shah. "They're asking physicians to report these cases to collect data."

Martin hopes to be out of the hospital within a week but has potentially another month of rehabilitation. If there is anything good that's come from this episode, Zane Martin said it's that many of his friends have now given up vaping.