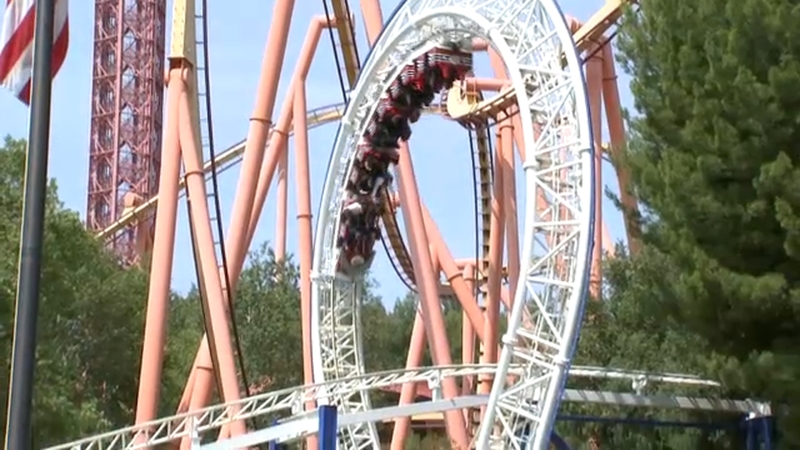 Gov. Gavin Newsom announced yet another vaccine incentive Wednesday a day after California fully reopened its economy. The governor spoke from Six Flags Magic Mountain as he announced the next 50,000 Californians to get vaccinated at participating clinics will get a free ticket to any of Six Flags' theme parks.

The free theme park tickets aren't transferrable and can't be resold, Newsom said. It's a $4.5 million value, according to the governor.

The tickets are the latest in a series of incentives big and small to get vaccinated.

On Tuesday, the same day when most statewide coronavirus restrictions were lifted, Newsom hosted an event at Universal Studios where ten vaccinated residents each won $1.5 million as part of the state's "Vax for the Win" incentive program.

The state is also still giving away $50 gift cards to anyone who gets vaccinated. They set aside 2 million of those gift cards and only 924,000 have been handed out -- leaving more than 1 million still up for grabs.

The governor announced the next 50,000 Californians to get vaccinated will get a free ticket

"Turns out these incentives have worked," Newsom said. "California lays claim as one of the only states that's seen a week-over-week increase in vaccination doses."

The governor reported there had been a 22% increase in doses administered week-over-week.
EMBED More News Videos

California Gov. Gavin Newsom was at Universal Studios to declare that the state has reopened for business.

In addition to the new vaccine incentive, Newsom announced some relief for Californians who are struggling to pay their bills.

"Anybody that's impacted by this pandemic that can't pay their rent and can't afford their water bill, or their utility bill, California will pay those bills, 100%," the governor said. "Going back to April of last year and going forward to September of this year. I need to say that because no one believes it."

There is still some confusion when it comes to what businesses and their employees must do in the workplace.