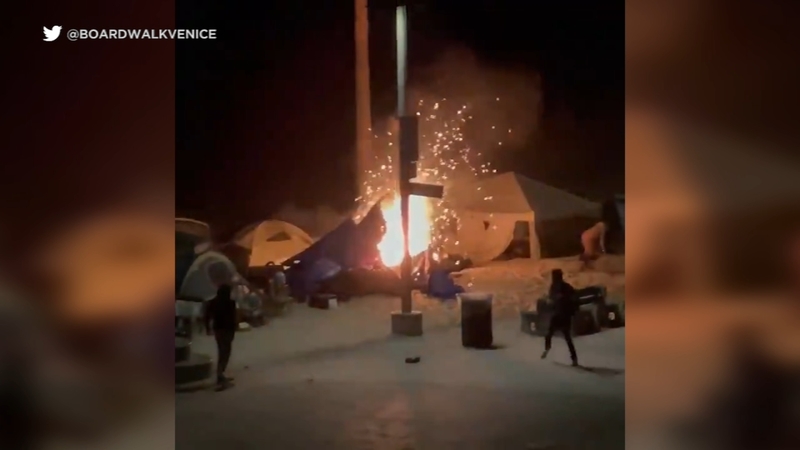 VENICE, LOS ANGELES (KABC) -- Residents in Venice continue to voice their frustration over growing homeless encampments in the area they say are becoming increasingly dangerous.

Eyewitness News obtained video of a homeless man being shot last week on the Venice Boardwalk, which also shows the shooter walk away while the victim moans in pain. The victim remains in the hospital in stable condition, and is not cooperating with police.

Los Angeles police doesn't know who or where the gunman may be.

The shooting took place at nearly the same spot where someone set fire to a tent. In that incident from earlier this week, video shows a small fiery explosion that ripped through a tent at an encampment. Bystanders were able to put the fire out with sand before firefighters arrived.

Residents say they are the latest in a series of chaotic incidents that include fights and other fires.

"Sometimes around the beach they're more erratic," said resident Ruth Rumack. "I had a guy walk up on me with a sword. I don't really know what he was doing. I don't know if it was a real sword, but it was pretty scary."

A home in Venice was destroyed and a dog was killed in a fire early Wednesday morning and neighbors are questioning if it was linked to the growing presence of homeless encampments in the area.

One woman who lives above where these incidents took place didn't want to appear on camera, but told Eyewitness News she's friends with many of the homeless who live outside her building but signaled the area isn't safe.

"It's like the wild, wild West," said Kevin Buttress, owner of Xquisite Barber Lounge in Venice.

"They've been lighting things on fire for the last six months. It's full mayhem down here," said Buttress. "Zombies, yelling and screaming. It's something people gotta deal with walking through the streets pretty much every day."

"I don't know what to do about it. They all blame (L.A. City Councilman Mike Bonin) and say he's not doing anything," the business owner continued saying.

Some residents believe Bonin, who represents the area, is not doing enough. Eyewitness News reached out to Bonin's office for an interview, but he was unavailable.

In a statement, Bonin addressed fires at homeless encampments, writing in part:

"As we work to house people, we are also taking action to help minimize the fire risk in homeless encampments in Venice. Starting this week, LAFD West is adding resources exclusively to the Ocean Front Walk area in Venice to focus on proactively engaging with unhoused neighbors to prevent fire risks, as well as helping respond to emergencies."

Bonin's statement also listed initiatives he is putting forth to try to house homeless people, including opening another housing project at a former motel near Los Angeles International Airport, push to open tiny home villages and interim housing, among other plans.