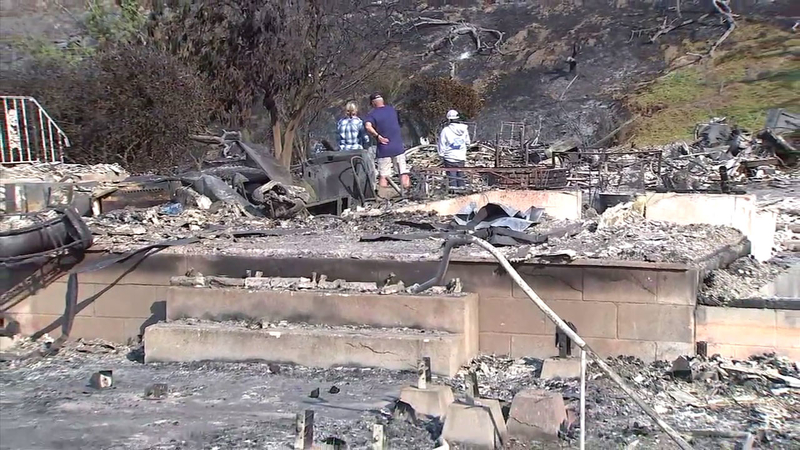 VENTURA, Calif. (KABC) -- Several families have lost everything they own to the massive and destructive Thomas Fire still raging in Ventura County Thursday, but despite their loss, one family says they're grateful they're alive today.

Kat Merrick and her family searched the rubble for hot embers. From her hilltop, flames sparked up a hotspot in the distance, worrying her.

"Every time that wind kicks up, even though you think it's burned over there, those homes could still ignite," she said.

Chris Corsones knows that he and Merrick will rebuild. He said the Thomas Fire may have burned 96,000 acres but has not claimed a human life, and for that reason, he's grateful and humbled.

Just 15 minutes away in another Ventura neighborhood, where fire spread indiscriminately, utility crews were working to repair the damage along Via Ondulando.

While crews worked, with a suitcase in tow, one couple left their home for the second time this week.

"Only for a couple of hours we are allowed to just come and pick up some stuff, but we don't know or have an idea when we will be able to come back," said Ventura resident Raul Gamino. "And I've said before, I've been in the neighborhood since '74, and I've never seen it this bad."