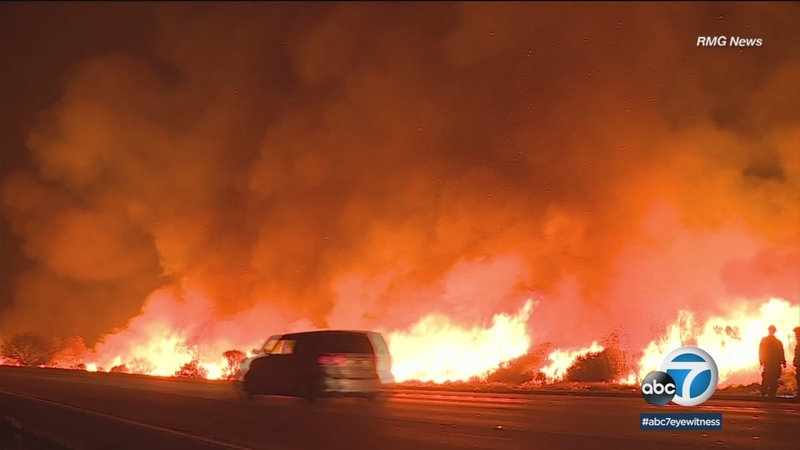 VENTURA, Calif. (KABC) -- The Thomas Fire expanded to 90,000 acres and is 5 percent contained as the blaze continued to rage and caused more evacuations in Ventura County Wednesday.

The blaze destroyed at least 150 structures, and Cal Fire said 12,000 more are threatened. A full damage assessment still needed to be completed.


By Wednesday night, areas in Ojai and Santa Paula, along with communities in the north coast of Ventura County, were placed under mandatory evacuations.

"I've never seen a fire like that before. It looks like it's coming back over here," Santa Paula resident Eduardo Gonzalez said.

The Thomas Fire in Ventura County has burned at least 90,000 acres and forced 50,000 evacuations.

Authorities were concerned late Wednesday about strong, 40-50 mph Santa Ana winds, which could be a "recipe for explosive fire growth" overnight, according to a meteorologist working with Ventura County fire officials.

Fire officials cautioned that a difficult night was ahead for firefighters amid fire scenes that remained "very active."

More than 15,000 homes in Ventura County were under evacuation as the blaze closed in on downtown Ventura, where multiple structures were reportedly burned. Fire officials said 50,000 people were evacuated from their residences.

In Ojai, patients and staff at the hospital were ordered to shelter in place as the fire roared back to life by the evening hours as the winds picked up speed and strength.

There were some concerns also that the fire could move toward Moorpark.

On Tuesday, strong winds whipped through the area and made the firefight dangerous and difficult. There was a lull in the wind Wednesday morning, but stronger Santa Anas were expected to pick up later in the evening and continue into Thursday morning.

Communities from La Conchita on the border of Santa Barbara County all the way through Santa Paula in Ventura County were under mandatory evacuations.