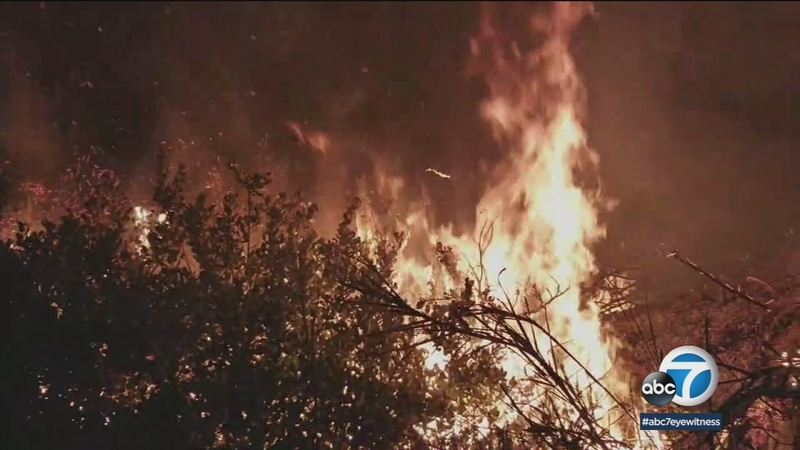 VENTURA, Calif. (KABC) -- The wind-whipped Thomas Fire destroyed more than 400 structures in Ventura County as it charred an area of at least 115,000 acres. By Thursday night, firefighters said the blaze was only at 5 percent containment.

As the fire continued to expand, Gov. Jerry Brown declared a state of emergency in Santa Barbara County and asked for a presidential declaration of emergency for all the wildfires burning in Southern California.

He asked for federal assistance, including Department of Defense air assets, shelter supplies and water and help evacuating large animals.

"I have determined this incident is of such severity and magnitude that continued effective response is beyond the capabilities of the State and affected local governments and supplemental federal assistance is necessary to save lives and to protect property, public health and safety, and to lessen the effects of this imminent catastrophe," Brown wrote to President Donald Trump.

With six major wildfires burning in California, Cal Fire provided the latest number on the combined blazes as of Thursday night:

Mandatory evacuation orders were issued for Faria Beach and parts of Carpinteria Thursday as the Thomas Fire continued its destructive path across Ventura County and expanded through Santa Barbara County.

The new orders included the area of Highway 192 on the south, Highway 150 on the east and Casitas Pass Road to East Camino Cielo. The area was previously under voluntary evacuation warnings.

No fatalities have been reported.

Although firefighters reported making good progress slowing the advance of the fire near some populated areas, new evacuation orders were issued for additional parts of Carpinteria Thursday night.

County and state officials give the latest update on the Thomas Fire which has destroyed more than 400 structures in Ventura County.

The 101 Freeway was fully reopened after an hours-long closure earlier in the day.

More than 2,500 firefighters from multiple agencies were battling the inferno, which spread toward Ojai and Ventura amid initially powerful Santa Ana winds and low humidity.

Winds were comparatively calm in parts of the burn area early Thursday morning, prompting cautious optimism among firefighters and residents.

The Santa Barbara County Sheriff's Office began evacuating about 300 residents from Carpinteria at about 1:45 a.m., according to a news release.


The evacuations included the area east of Highway 150 from Rincon Hill Road south to the 101 Freeway, including Bates Road and Rincon Point, the statement said.

After an unoccupied home was destroyed overnight in La Conchita, firefighters were mopping up as a hillside smoldered nearby. Meanwhile, some 15,000 other structures in Ventura and Santa Barbara counties were still threatened, according to Cal Fire.

The 101 Freeway was temporarily closed in both directions between SR-126 in Ventura and SR-150 in Carpinteria. The California Highway Patrol reopened the southbound side of the 101 about 6:45 a.m. Northbound lanes were reopened about 15 minutes later as patrol vehicles escorted traffic along the coastal stretch.

At one point the fire spread nearly to the edge of the sea, threatening homes in Faria Beach. The small community is located between Pacific Coast Highway and the ocean.

A CHP officer drove through Faria Beach announcing the evacuations through a loudspeaker as gusts roiled smoke through the streets.

Firefighters from multiple strike teams, supported by water-dropping aircraft, made a stand against dramatic flames as the winds shifted at the scene.

By Thursday afternoon, it appeared most of the homes in Faria Beach were still standing as the flames were reduced to mostly hotspots.

A few Faria Beach homeowners began cautiously returning home to augment structure-protection efforts using their own hoses on their properties.

He was grateful for the work of firefighters, but also very aware the winds could pick up again at any time.

"We're very relieved and very thankful," Nowak said. "If we didn't have those firefighters here, this probably wouldn't be standing here."

Carpinteria also appeared to have been spared serious damage to homes by Wednesday afternoon, though the danger remained as firefighting efforts continued.

Helicopter were making multiple water drops and bulldozers were cutting fire lines on the ground, aided by winds that were not strong in this particular area.

When the winds were calm, firefighters also set back fires to remove fuel from the ground in case the advanced further toward Carpinteria.

The big concern was preventing the flames from cresting a hill to reach homes by the ocean.

"It's been a long few days," said Carpinteria homeowner Matthew Macias. "Very rough. And the air quality doesn't help at all. It's really bad."

The cause of the Thomas Fire was under investigation.

A bit of good news in Ojai, where firefighters have stopped one area of the #ThomasFire! They saved an entire neighborhood along Rice Rd. The fire near is laying low with no winds right now. pic.twitter.com/ZGnpD0hkxq