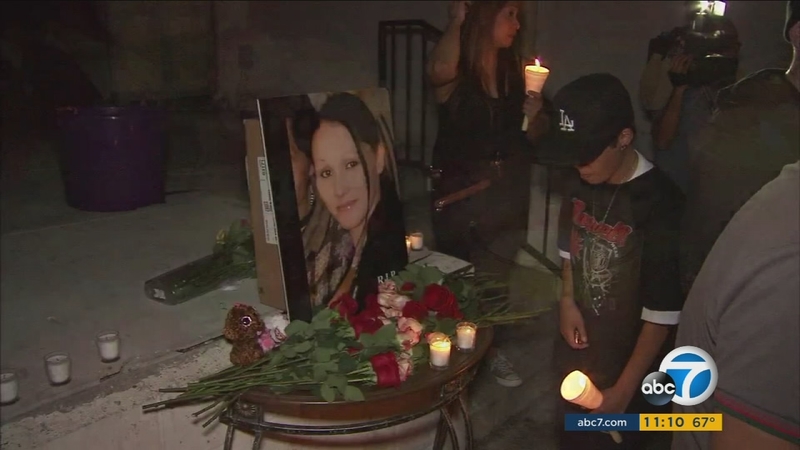 LOS ANGELES (KABC) -- An emotional vigil was held for a woman who was gunned down inside a Los Angeles apartment Tuesday morning as the search for her killer continues.

Lauren Olguin, 32, was shot to death during a domestic dispute at a friend's apartment in the 500 block of Virgil Avenue, police said.

"I was told she was autopsied today. I was also told she was three months pregnant, so the news just keeps getting...I don't think it's hit me quite yet," said Jerilyn Olguin, the victim's mother.

Family members say Olguin was killed in front of a half-dozen witnesses.

"They told me she was playing poker with some friends upstairs and that her boyfriend showed up and started arguing with her, something about a car, and then he started hitting on her and then shot her in the head," said Christian Tohme, the victim's brother.

Olguin battled drug problems and had not been in contact with her family in recent years.

Her mother says she knows who the dangerous suspect is who killed her daughter.

"This is a bad guy. God forbid he does this to someone else. He's already shot someone else in the head and shot someone in the arm and went to prison for 17 years for it, and now my daughter, he murdered her," she said.

Family and friends are urging anyone with information on Olguin's murder to contact the LAPD's Rampart Division.