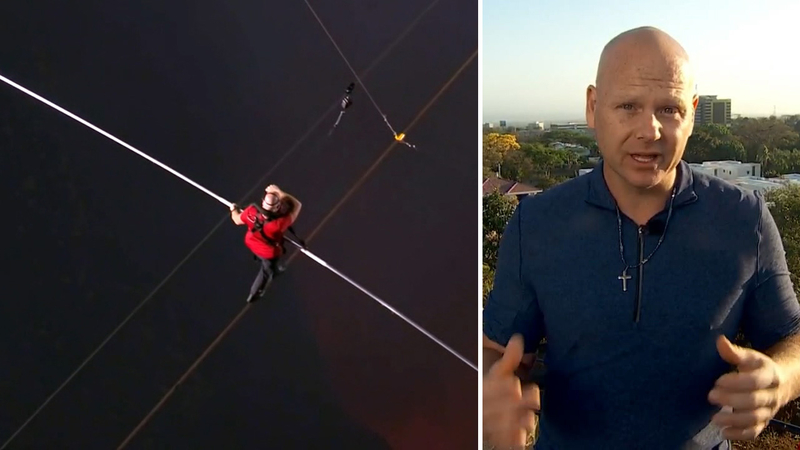 "I haven't slept a lot in the last two-and-a-half weeks because of this event, so to be honest, I thought I can finally relax a little bit," he told Good Morning America.

Wallenda faced intense heat, poisonous gases and molten lava during the 30-minute walk, his "longest and highest highwire walk ever attempted," according to ABC, which aired the entire event as a live two-hour special.


He said his biggest challenge in traversing the Masaya Volcano in Nicaragua was battling the wind, which he said was worse than during his televised walk over the Grand Canyon.

"There was a point I took a step and the winds were so strong in my face, it pushed me backwards, and I thought I was going to have to step backwards so, again, we knew there were a lot of things we couldn't predict, but the winds were much worse than expected," he said.

The stuntman also said thick gases were a problem. He wore a gas mask during the walk to protect from dangerous haze but said it caused his eyes to wander, throwing off his equilibrium.

Yet despite the danger, Wallenda said he was able to take in the beauty of Masaya.

"The wire was very stable, and the gases were thin at the very beginning and the very end of the walk, so it was pretty mesmerizing to be honest with you. I mean, it is indescribable to explain the lava flowing below," he said.

And while this may be his biggest professional challenge yet, this won't stop him from trying similar stunts in the future.

"I think at this point my life is about parallels. What can I do that will be similar and inspiring and motivational to others?" he said.

Wallenda is a seventh-generation acrobat and comes from a family of star tightrope-walkers.

For his last major stunt, his walk on live television over New York's Times Square, Wallenda was tethered in case of a fall. But that was more about a New York City ordinance than caring for his own safety.