Investigators say the man along with two others may have been trying to return items at the store they didn't buy.
KABC
By Tony Cabrera and Jessica De Nova 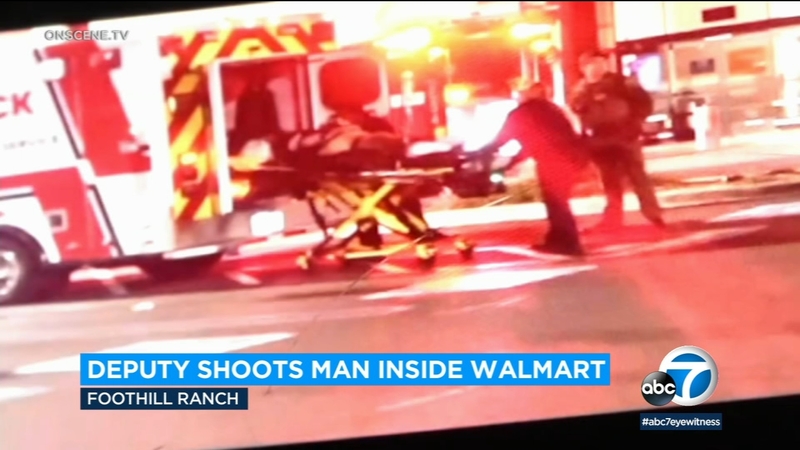 FOOTHILL RANCH, ORANGE COUNTY (KABC) -- Shots were fired inside a Walmart store in Foothill Ranch after three shoppers were accused of trying to return items they didn't purchase, investigators say.

It happened at the Walmart on Towne Centre Drive at 9:40 p.m. on Wednesday.

According to the Orange County Sheriff's Department, deputies received a call about suspicious activity regarding three people in the store. Investigators say they were believed to be attempting to commit fraud by returning items they didn't buy.

When deputies tried to intervene, witnesses say a man wasn't cooperating and pulled out a weapon - investigators say he was armed with a knife and a gun.

#OCSDPIO A deputy-involved shooting occurred the evening of Jan. 19, 2022, inside the Walmart on Towne Centre Drive in Foothill Ranch, wounding one man who was armed with a gun and a knife. More info in the press release below. pic.twitter.com/SZ9zkX8DHM

That's when the shooting occurred and the man was shot.

The two other people, a man and a woman, got into a vehicle and took off, according to deputies. They were later found in Midway City about 20 miles away from the store and have since been detained.

The man who was shot was rushed to hospital. Deputies say he underwent surgery Thursday morning though his condition is unknown.

The sheriff's office says there are no additional suspects involved and there is no immediate threat to the community. The investigation of the deputy-involved shooting will be handled by the Orange County District Attorney's Office.