50 years of Disney history on display at OC museum 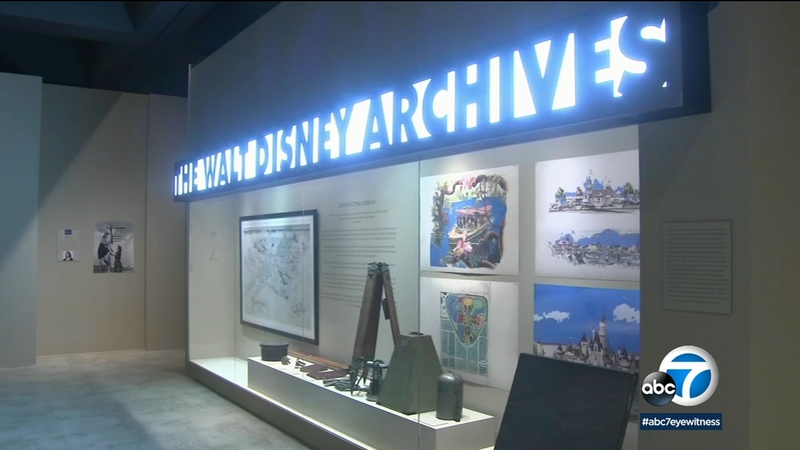 SANTA ANA, Calif. (KABC) -- The world of Disney has come alive at the Bowers Museum in Santa Ana for a new exhibit - "Inside the Walt Disney Archives: 50 Years of Preserving the Magic."

"From costumes and merchandise and from our attractions, there's so many amazing collections," said Michael Vargo, vice president of corporate communications for The Walt Disney Co.

The exhibit premiered across Japan two years ago for a D23 Expo and turned out to be hugely popular.

"We thought well, it's obviously a good idea and so we decided to create an actual traveling exhibition program and bring this exhibit back to California and retool it to travel around the United States," said Becky Cline, director of the Walt Disney Archives.

As fate would have it, the first stop is in Disneyland's own backyard in Orange County.

The world of Disney has come alive at the Bowers Museum in Santa Ana for a new exhibit - "Inside the Walt Disney Archives: 50 Years of Preserving the Magic."

"It builds our brand, presenting nothing but the best, the classics. And of course it helps with membership and visibility," said Peter Keller, president and CEO of the Bowers Museum.

It's Disney's very own behind-the-scenes access that will surely bring back fond memories.

"The haunted mansion has always been near and dear to my heart. I love that attraction. At all the parks, I've seen it at all the parks worldwide, every version of it you can imagine. But these characters here are from the attraction that's at Walt Disney World," said Cline.

"One of my favorite is the automaton bird in a cage. This was actually used to inspire Walt to develop the audio animatronics. It was created in the early 1900s," said Vargo.

"Since I was a kid there were things that intrigued me a lot, like Davy Crockett's hat, Zorro's sword, Mary Poppins' bag, of course the cars. Herbie The Love Bug behind me here is a classic," Keller said.

The exhibit opens Saturday, March 7 and will remain open through the end of August.