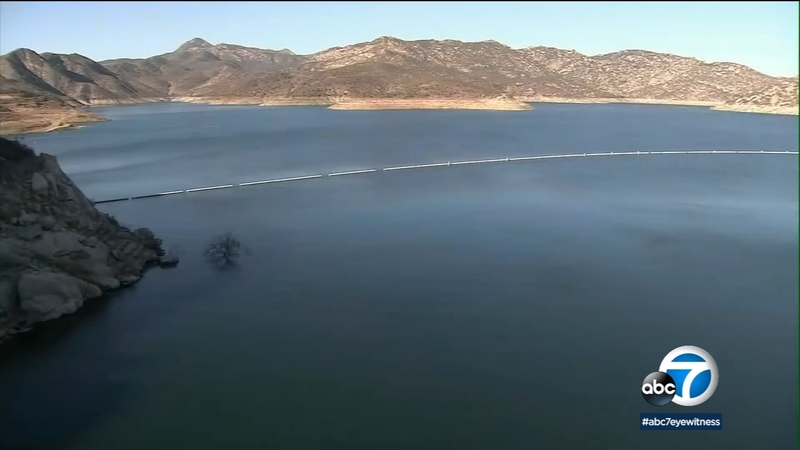 California will soak up some much needed rain this week on the heels of a sobering decision from the state to drastically reduce water distribution to the Los Angeles area due to our ongoing drought.

The Los Angeles Department of Water and Power generally receives 40% of its water from the State Water Project, which means a significant reduction can have a real economic impact.

Meanwhile, the San Diego County Water Authority gets less than 1% of its water from the state, a remarkable difference from the 95% the agency received from the Metropolitan Water District of Southern California in the early 1990s.

How did they get there? Coincidentally, the motivation was from a threatened 50% reduction in water allocation due to drought conditions at the time.

"We ultimately were cut back by over 30% for 13 months. It harmed the economy and harmed the quality of life here. And it really wasn't a situation that we ever wanted to experience again," said Sandy Kerl, the General Manager of the San Diego County Water Authority.

Conservation became a way of life in San Diego. Water use per day has been reduced by 50% since 1990 and remains consistent with levels seen during our last drought between 2012 and 2016.

Californians stepped up their water conservation in October by reducing their usage 13% compared to October last year.

However, San Diego knew conservation could only be part of the solution. You can't conserve what you don't have so finding new water sources became part of the plan. One of the sources is the Claude "Bud" Lewis Carlsbad Desalination Plant.

"You've got to diversify and have different solutions. You got to bring water in, you got to create new water. That's what this facility does. We're bringing water from the Pacific Ocean, the biggest body of water in the whole world, we're creating a water supply from there. That's water that we can recycle over and over again, here in our region," said Jeremy Crutchfield, a water resource manager with the utility.

The desalination plant now provides 10% of all water used in the county. It came online in 2015, during the last drought, and proved to be a stress test of sorts.

"The Carlsbad DeSal plant is a great example as to what (desalination) can really add to a water portfolio, to help diversify it," said Michelle Peters, the Poseidon Technical and Compliance Manager.

"There's a lot of data and information here that we are constantly sharing with other agencies up and down the coast, who aren't thinking about seawater desalination. The proof's in the pudding. I mean, this works," Crutchfield added.

Another piece of the puzzle will come online in Oceanside this month.

In a report from the California Department of Water Resources, 2021 is the second driest year in state history.

"We're really making use of something that we would otherwise throw away," said Cari Dale, the director at Oceanside Water Utilities.

Waste water is captured and treated every day in cities around the world, but here, instead of discharging that water into the ocean, three to five million gallons a day will be treated at Pure Water Oceanside and then pumped into an aquifer.

After three to six months, the treated water will be extracted and delivered to customers.

"It will provide 30% of Oceanside's water supply and over the long-term, in addition to our recycled water supply projects, it will supply 50% of the city's needs for water by 2030," Dale explained.

One of the more visible commitments was increasing the size of the San Vicente Dam in 2014. A $400 million project increased the dam size by 117 feet while almost doubling the reservoir's capacity.

Partnering with the city of San Diego, the effort is meant to provide insurance for supplying water in periods of extreme drought.

"We feel that we're setting a good example for not only our state, the country, but for the world and how we can work together as multiple agencies to make sure that we have enough water to supply us when we need it," said the Sam Diego County Water Authority's principal engineer, Jeff Shoaf.