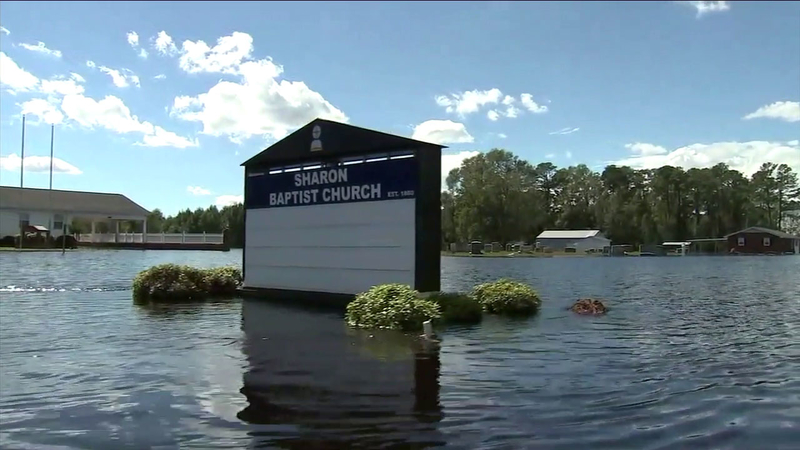 CHINQUAPIN, N.C. (KABC) -- As Florence moves out of parts of North Carolina Tuesday, the days of constant and heavy rains left communities devastated by flood waters.

In Chinquapin, a small community outside of Beulaville, North Carolina, several feet of water cover roads and highways and fill churches and homes. A monitoring gauge used by the U.S. Geological Survey stopped working Sunday after water levels hit its operational limit of 24.2 feet. That is 8 feet above major flood stage.

Most of the 1,000 residents living in the area were able to evacuate safely, but have been out of their homes for several days and will remain away for several more.

Many people said Florence, which is now a tropical depression, was the worst hurricane they'd ever seen. At the peak of its wrath, flood waters flowed through doors and homes, leaving a lot of the community underwater.

But amid the devastation, there was a happy story. Volunteer firefighters who were out on a boat were able to rescue a dog that had been left behind by its owner. The owners had told firefighters in the rush to flee the storm, they were not able to grab their beloved pet.

The dog and its family were reunited.

A swift water rescue team from Orange County drove 60 hours to help out North Carolina residents and performed several rescues over the last couple of days.

They said they could not be happier to help those in need.

"It's hard to say it's rewarding just because it's a life and death situation. We're never going to cheer for something like that, but it is pretty cool to be able to use our training and help people out in this community," Orange County Fire Authority firefighter Dickens Thai said.

The team has rescued several people as well as animals and said in one instance, an 83-year-old man who tried to cross a road in his pickup truck ended up being swept away by the flood waters. The man ended up clinging to a tree and the team was able to get to him in time to save him and get him to a hospital.

Since Florence made landfall, at least 17 people have been killed in the Carolinas.