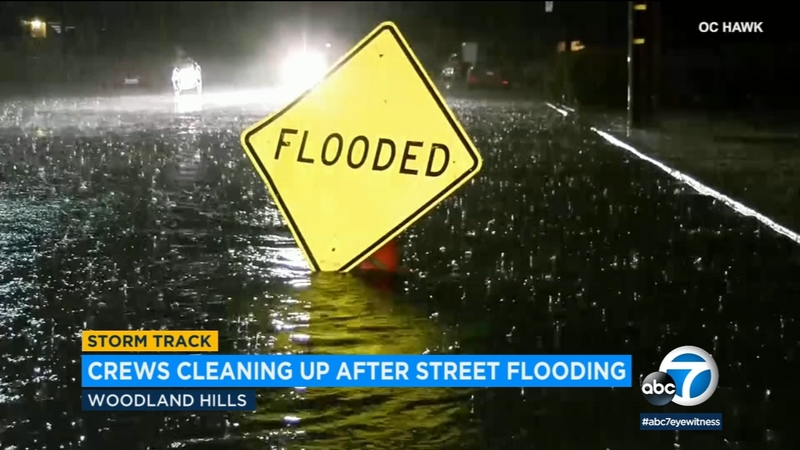 LOS ANGELES (KABC) -- Rain that moved into Southern California Sunday will remain on Monday and potentially cause serious flooding and mudslides.

The National Weather Service said a flood advisory will be in effect in Los Angeles County until 9 a.m. as moderate to heavy rain fell across the county during the early morning hours. The agency also warned of minor and shallow mud and debris flows in and around recent burn areas, including the Saddle Ridge, Getty and Tick fire burn areas.

Drivers encountered slick roads early Monday morning, with the California Highway Patrol shutting down all southbound lanes of the 110 Freeway in Carson at about 4:37 a.m. due to flooding on lanes.

MORE: Get your 7-day forecast

In Woodland Hills, firefighters were called to a neighborhood after knee-deep water flooded homes and streets. The rain also forced crews to close the Sepulveda Basin as they rescued at least one person from rising water.

A mudslide forced the closure of parts of Malibu Canyon Road for several hours Sunday evening and it did not reopen until just before 1 a.m. Mud and rocks slid onto the road in an area between Piuma Road and Pacific Coast Highway.

On Sunday night, NWS said that "moderate to locally heavy rain" was hitting the Sepulveda Pass, including the Getty Fire burn area.

Drivers headed to Los Angeles International Airport also had to deal with slick roads on their way to the airport during a busy holiday travel rush.

Rain is expected to hit the region until at least Thursday.