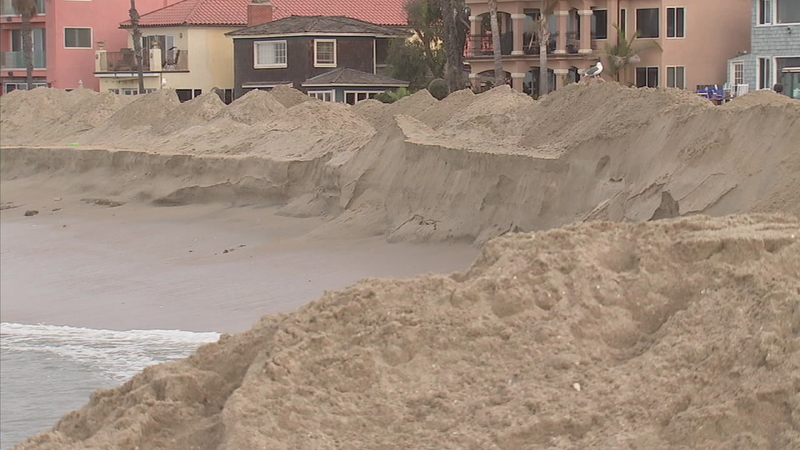 LONG BEACH, Calif. (KABC) -- Concerned residents living along the coastline in Long Beach are ramping up defense measures after water surges provided a threat too close for comfort near their homes.

Residents saw as powerful waves breached a berm on the Long Beach peninsula thanks to a surge from Hurricane Sergio, which is creating unusually high surf along these coasts.

Crews with truckloads of sand are working to reinforce berms ahead of another expected surge.

"As far as the waves are concerned, these waves are probably twice as big," resident Moesha Habani said.

Habani has lived on the peninsula for 20 years. While surges like this are concerning, he feels the community is protected.

"These guys were awesome. They were on top of it," Habani said. "We got texts, we got emails, we got notifications, people knocking at the door. Can't get much better than that."

"This issue is a tidal action that circulates when the beach comes together with this peninsula," said resident Steve Scott. "And it causes a swirling action that stirs up the sand and takes it downtown."

Scott has lived in the community since the 1960s, and is actively involved in efforts to protect the eroding beach. He said those efforts have included artificial kelp and an artificial reef to stop the tidal flow, but he's most optimistic about a new plan expected to be complete in about 6 months.

"A water slurry project to add constantly sand to the beach to reduce the slope," he said. "It's the high slope that's the problem, swirling water comes in and pulls all the sand out."

He and his neighbors gathered at the end of the peninsula to watch the high tide and growing berm.