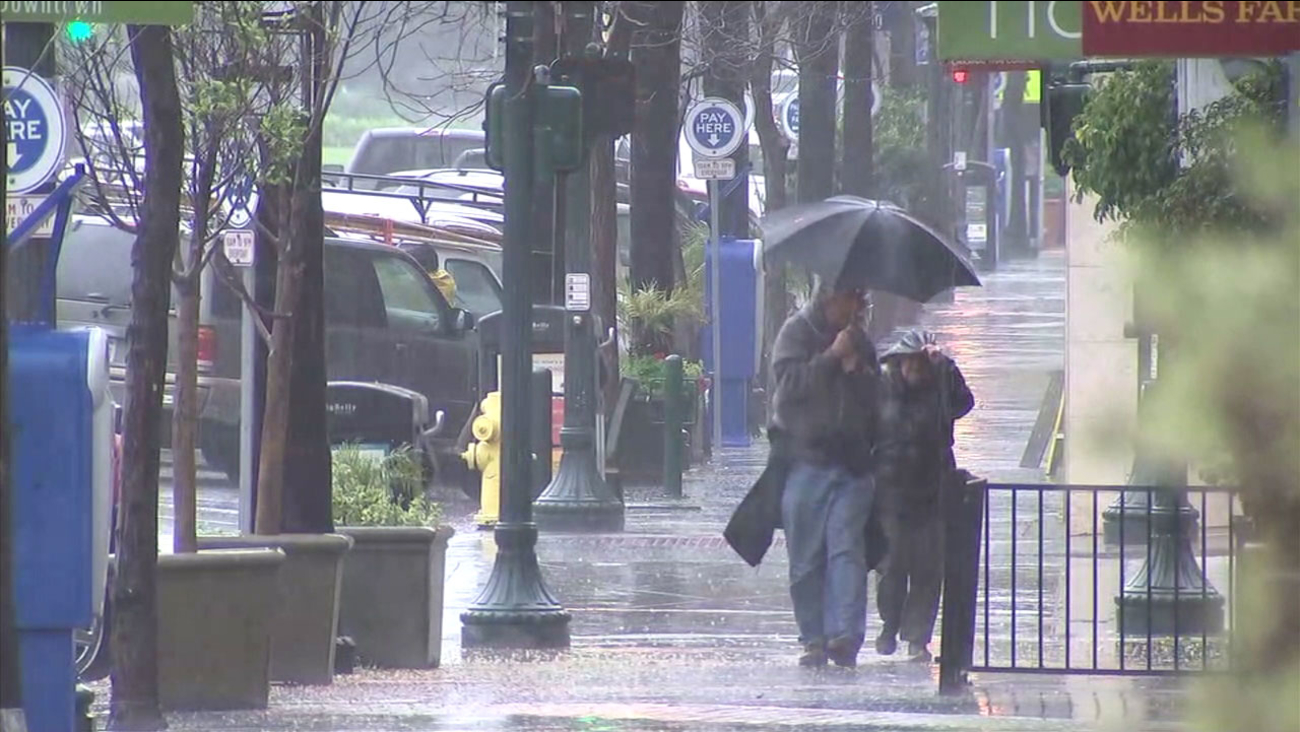 People hold their umbrellas as they walk along a sidewalk covered in water during a rainstorm in Ventura County on Friday, Feb. 17, 2017.

LOS ANGELES (KABC) -- As Southern California was beginning to dry out on Saturday following a monster storm that struck the region, forecasters tallied startling and record-breaking rainfall totals.

The powerful rainstorm on Friday dumped more than 6 inches of rain in areas of Los Angeles County and nearly double-digit totals in parts of Ventura County, according to the latest rainfall reports from the National Weather Service.

The hardest-hit areas in L.A. County were in the mountains and foothills, with Opids Camp seeing 6.22 inches of rain and Camp Hi Hill with 5.89 inches. Mt. Baldy received 4.56 inches of rain and the Santa Anita Dam gathered 3.46 inches.

The heavy rainfall that fell around Southern California came close to the records for the date in several locations. Downtown Los Angeles saw 2.01 inches of rain, according to the NWS. The record for that date is 2.18 inches, set in 1884. Camarillo saw 2.85 inches, coming close to the record of 2.86 set in 1980.

Long Beach Airport received record rainfall of 2.77 inches, surpassing the previous record of 1.81 inches in 1980. Lancaster also beat its 2005 record of .23 inches of rain after receiving more than double the rainfall with 1.43 inches.

The seasonal totals for the region are also already far above an average year.


In a normal February, about 3.25 inches of rain fall at LAX. As of now, only halfway through the month, already 3.59 inches have fallen. And in a normal January, 2.71 inches falls at LAX. Last month, 7.44 inches fell. For an entire year, LAX normally sees about 13 inches of rain. In the seven weeks since Jan. 1, the airport has already seen 11 inches.

Ventura County was flooded in many areas, especially the mountains. Old Man Mountain received 9.89 inches of rain and Matalija Canyon was hit with 9.09 inches. The Valleys experienced high floodwater levels as well, including Red Mountain with 7.68 inches of rainfall and Westlake Village with 6.57 inches.

The Inland Empire received their fair share of high water levels. In the 48-hour period ending at 9 a.m., top rainfall amounts recorded around the county included 1.51 inches at Lake Matthews, 1.45 inches at Railroad Canyon Dam, 1.42 inches in Riverside and 1.38 inches in Murrieta, according to weather service data.