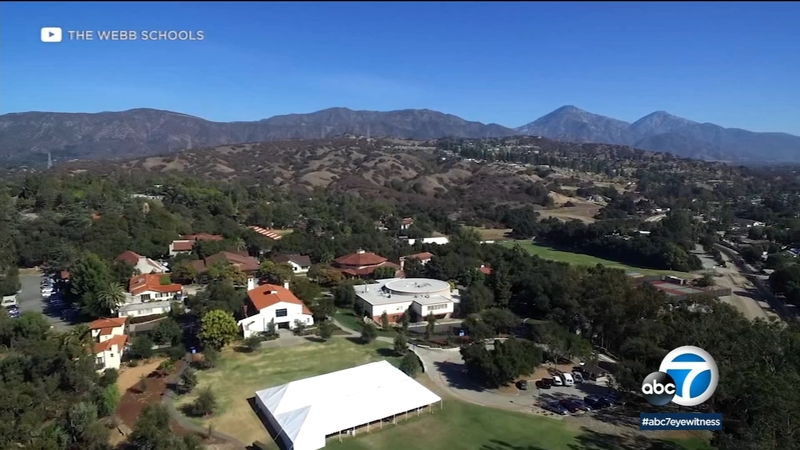 CLAREMONT, Calif. (KABC) -- The Webb Schools in Claremont received a $100 million donation from an anonymous donor, the largest gift ever made to an independent high school west of the Mississippi, officials announced.

The donor, a Webb alumnus, wanted to honor his parents for their sacrifices in sending him to Webb "and as a recognition for Webb's indelible impact on his life," according to school officials.

The Webb Schools is the collective name for two private schools for grades 9-12, founded by Thompson Webb in 1922. The schools include Webb School of California, Vivian Webb School and the Raymond M. Alf Museum of Paleontology, the only accredited museum of paleontology on a high school campus.

"This transformative gift of at least $100 million will enable Webb to dramatically expand access to our unique, unbounded program to the very best and deserving students regardless of financial circumstance," Head of Schools Taylor Stockdale said. "It is the single greatest act of philanthropy in Webb's history."

"When great teachers share experiences and exchange ideas, the invaluable art of teaching becomes electric. This energy attracts the best and most imaginative students eager to be challenged, both by their teachers and by each other," the donor said. "In turn, these students go on to become inspired graduates coveted by the world's best colleges and universities. And, more importantly, students get exposed to enough of what the world has to offer that they are able to find the place -- be it a niche or an arena -- where they can make their mark. Webb then truly becomes a place where the opportunities are boundless."

The gift is the centerpiece of Webb's centennial campaign, called The Next 100, an effort aimed at generating at least $200 million by 2025. The campaign, which entered its public phase Saturday, has raised more than $170 million, including the estate gift of at least $100 million.

"I am astounded by the donor's generosity and excited by this gift's promise to transform the lives of Webb students and teachers," said Jim Dahler, who has been teaching at Webb for 34 years.