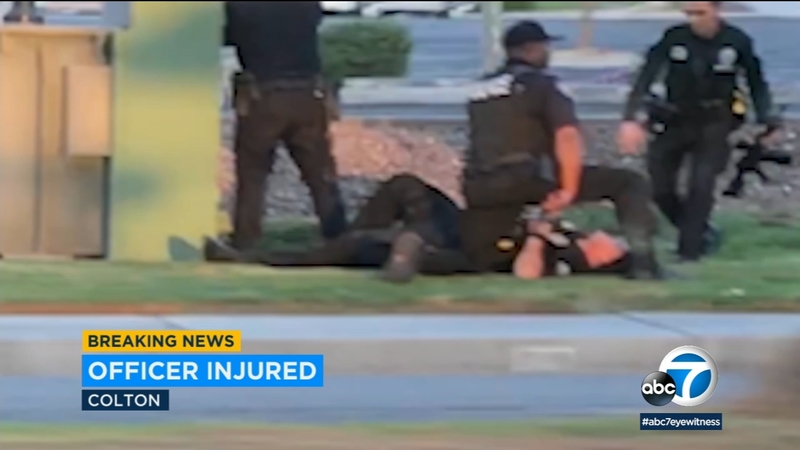 Suspect dead after firing shots from inside Colton bank

COLTON, Calif. (KABC) -- A suspect was dead with an apparent self-inflicted gunshot wound after firing at officers from inside a Chase bank in Colton Tuesday night, police said.

A large police presence had descended on the shopping plaza after a report of a possible armed robbery and shots fired at officers Tuesday evening.

The incident began when officers were called to the bank near Washington Street and Cooley Drive on a report of a possible robbery, according to Sgt. Ray Mendez.

When officers arrived, someone fired at them from inside the bank, shooting through the glass. One officer sustained a minor injury to the upper body that was considered not life-threatening.

Officers retreated and surrounded the bank and a SWAT team was called in as the immediate area was evacuated.

"At this point we know either through witnesses or through a visual of one suspect on the ground with a possible self-inflicted gunshot wound," Mendez said.

But police were cautious about entering the bank because of a suspicious duffel bag on the ground near the suspect.

By around 8:40 p.m., officers had entered the bank and a short time later appeared to be standing down. The suspect was dead and the duffel bag was not considered a threat.

It was not immediately known if the incident was actually a robbery attempt.

The officer who sustained minor injuries was expected to recover, according to the Colton Police Department.

Authorities were asking the public to avoid the area until further notice.