The mall general manager gave ABC7 a tour before it officially opened to the public.
KABC 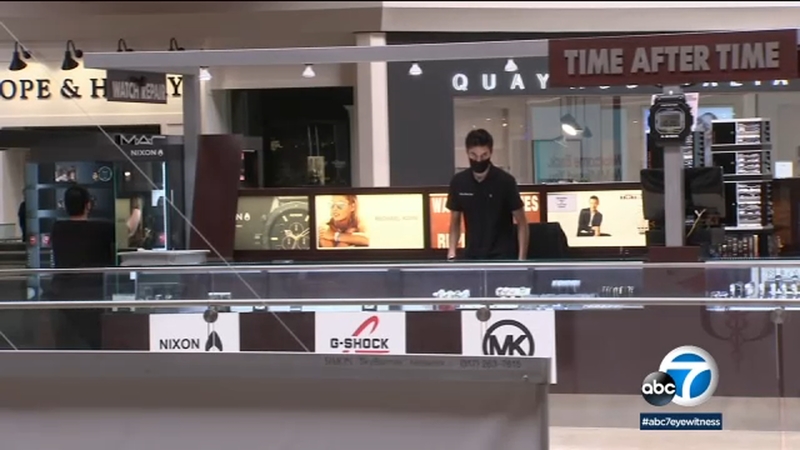 BREA, Calif. (KABC) -- After being closed for almost 10 weeks, the Brea Mall reopened on Tuesday with new safety protocols in place, unleashing shoppers who are eager to spend some money.

"It felt good to walk around and see people shopping and stimulating our economy, which we need right now," said Michael Mejia of Brea.

Mall General Manager Kevin Caulson gave ABC7 a tour before it officially opened to the public, starting with only two ways to get in. Security guards will help monitor how many people are coming in.

"The two mall entrances for Brea Mall that are open communicate to the employees and the customers as soon as they come on property how to enter and exit safely," Caulson said.

There are also arrows directing customers which way to walk. They've also prevented ways for people to gather in what would normally be a resting area.

"We have removed that soft seating to further enhance the safety for our employees and customers," Caulson said.

In the food court, there are fewer tables, all spread out. And the lines for each restaurant are marked with tape on the floor.

"The tape will show directional flow for the traffic to go in. It will show the six feet social distancing."

In the bathrooms, stalls and sinks are blocked off so a limited amount of people will be in there at once. It may all look and feel inconvenient, but some shoppers told us they're just happy to be able to come back.

It's a little bit different than what we're normally used to, but in a situation like this, i mean you gotta adjust you know. I think this is just gonna be the new norm for a little bit, so it's fine yeah," Sava Basith of Fullerton said.

Since the announcement was so last minute, not all stores at the mall were open on Tuesday, so they'll be opening on a rolling basis throughout the week. To see what stores will be opening the following day, go to the mall's website.

Orange County small businesses are welcoming back customers this week after the state approved the county for a more aggressive reopening.