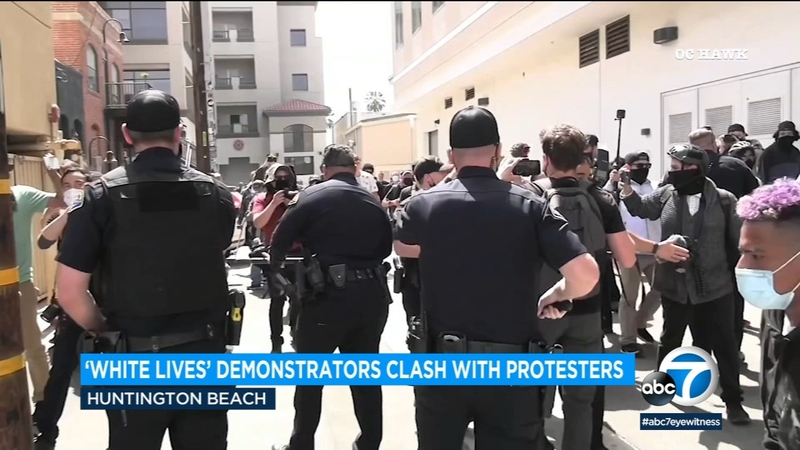 It was unclear who advertised or organized the event, but it appeared there were far more counter-protesters in the crowd, particularly representing Black Lives Matter.

There were some scuffles in the crowd and a few incidents involving police officers.

At 2:36 p.m. the Huntington Beach Police Department declared an unlawful assembly in the area of 5th Street and Walnut Avenue about a block from the pier "in order to disperse an unruly crowd."

Members of the public were being asked to leave the area. Police say the crowd did begin dispersing after the order was given.

The event had been promoted on social media as a "White Lives Matter" rally set to start at 1 p.m. but police said they hadn't identified the organizer.

Large numbers of police were deployed in the morning, including helicopters and mounted officers on horses.

Dozens of activists with Black Lives Matter and other organizations showed up in the morning well before the event's expected start time.

Police estimated about 500 people total showed up to the area.

Twelve people were arrested for various offenses, including carrying weapons, fighting in public and disturbing the peace.

At one point, a scuffle broke out involving a man carrying a Trump 2020 flag. There were no serious injuries reported.