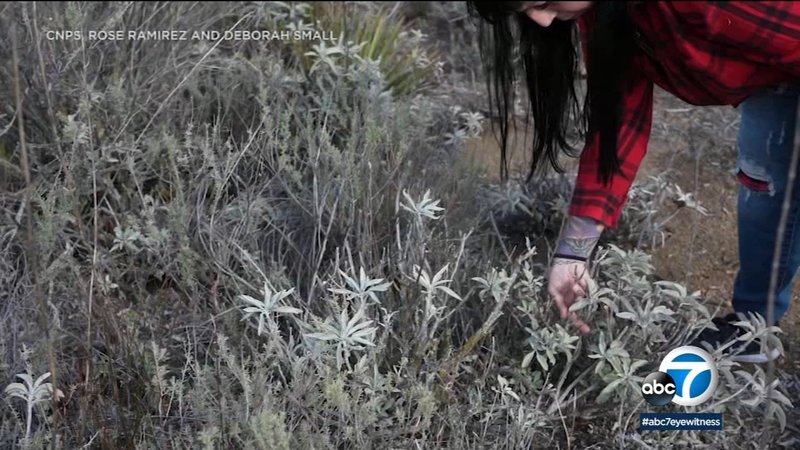 You can help stop the poaching of white sage in SoCal

People around the world want to get their hands on white sage as it becomes increasingly trendy for smudging. However, in addition to the appropriation of Native culture, most who purchase it are unaware of the heavy price the sacred plant and native communities are paying.

"That sage bundle you're burning in your apartment in New York City to get rid of the bad vibes, that sage was ripped out from a place that had been part of someone's family, community for thousands of generations," said David Bryant, director of education and engagement at the California Native Plant Society (CNPS.)

CNPS estimates that with very few commercial growers, the vast majority of white sage products on the market are poached. The plant only naturally occurs in Southern California and Northern Baja California.

For years, people have poached it from natural habitats like the North Etiwanda Preserve in Rancho Cucamonga.

CNPS launched "Saging the World," an Indigenous-led campaign featuring Native voices and the work of Rose Ramirez and Deborah Small. They're co-authors of "Saging the World," first published in News from Native California in spring of 2020, and the "Ethnobotany Project: Contemporary Uses of Native Plants | Southern California and Northern Baja."

In pop culture, white sage is practically synonymous with smudging, a wildly popular trend appropriated from Native cultures. Many celebrities and those who say they're promoting "wellness" are instead contributing to its decimation.

They have documented the use of native plants, from their medicinal qualities to their cultural significance.

"The stereotype of white sage by non-Native people has often been a prayer and ceremony and meditation," said Ramirez, adding that while the Native people they spoke with may use it for some of those things, one primary purpose they described is for funerals.

Their research has helped communicate the deep impact poaching has on Native communities.

"How important it was for their culture and what the decimation of these white sage fields was doing to traditional gathering areas," said Small.

The campaign, including a documentary co-directed by Ramirez, Small, and Bryant, shows people how they can help: boycott wildcrafted products that are promoted as sustainable but not backed up with evidence, connect more deeply with the land and grow native plants.

"They're profiting also off the destruction of Native habitats," said Ramirez of the people contributing to the poaching of white sage.

"People can show their respect by cultivating themselves but also learning about nurseries that are cultivating it," said Small.

One of those is the Tree of Life nursery in San Juan Capistrano where we conducted our interview.

Ramirez and Small hope legislation will be part of the solution. They suggest certifications as one option. They've reached out to Assemblyman James Ramos, who represents the region where much of the white sage is poached.

"Certainly, we'd be interested in looking at carrying legislation that would start to protect those areas and the plants and tie it to the cultural aspect," Ramos told Eyewitness News.

Last year, Gov. Gavin Newsom signed the first piece of California legislation dealing with plant poaching, making it illegal to remove Dudleya plants from state and private lands without a permit or permission.

"I think we see the ivory tusk-type component where people are poaching some of those types of animals and getting into the United States and they were held accountable. So why can't we do the same thing and hold people accountable for the harvesting of those plants for a commercialized-type venture?" said Ramos.

"We would like to make sure that any sort of protections for plants such as the white sage does not interfere with Native gathering rights," said Ramirez.

Ramirez and Small stress they're continuing the work of those who came before them to protect a plant that to Native people is an ancestor.

"We're really in a sense doing the work that people have already put in place," said Small.

The "Saging the World" documentary premieres on Earth Day.