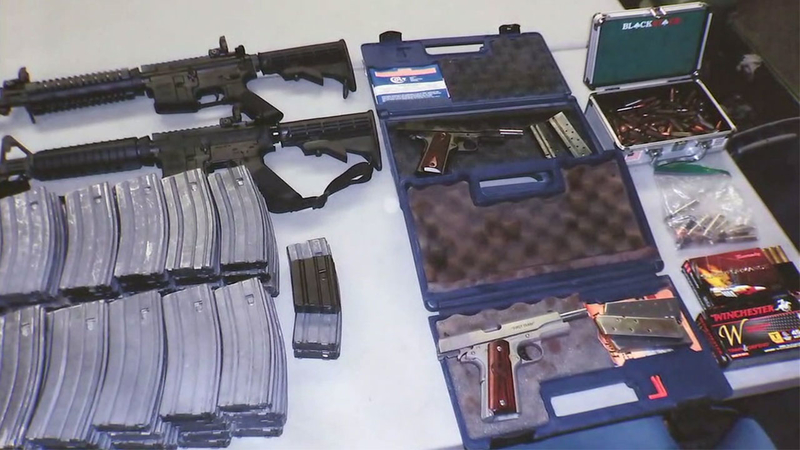 WHITTIER, Calif. (KABC) -- A high school student and his 28-year-old brother were arrested after the teenager threatened to open fire at a campus in Whittier and authorities found a massive cache of firearms and ammunition at their home, authorities announced Wednesday.

The investigation began after the 17-year-old suspect was asked to remove his headphones and made the threat against El Camino High School, a school official said.

Robert Jacobsen, the in-house counsel for Norwalk La Mirada Unified School District, said the student was upset by the request made by a teacher to take his headphones off in class and made the threatening comment Friday outside the classroom.

Jacobsen said the comment was overheard by Marino Chavez, a school safety officer. The student continued making threats, telling Chavez that he would carry out the shooting in three weeks, according to Jacobsen. The student later said he was joking, Jacobsen said.

"I'm not a hero. I'm just doing my job every day. You can't be saying things on school campuses, especially with what's going on around the country," Chavez said.

Deputies were called, and an investigation resulted in finding a collection of weapons and ballistic evidence at the student's home, Los Angeles County Sheriff Jim McDonnell said at a Wednesday news conference.

Detectives obtained a search warrant for the residence, where they discovered two AR-15 rifles, 90 ammunition magazines and two handguns, the sheriff said, adding that one of the assault rifles was unregistered.

The student's older brother, Army veteran Daniel Eriberto Barcenas, claimed ownership of the weapons, McDonnell said. He was arrested on multiple charges including: possession of an assault weapon, import of a high-capacity magazine, failure to register a handgun and criminal storage of firearms.

Barcenas was booked into the Norwalk sheriff's station and held in lieu of $35,000.

The teenager was arrested on suspicion of making criminal threats. His name was not released because he is a minor.

The weapons "were readily available to him," the sheriff said of the younger suspect. They also said he had ammunition and loaded magazines in his room. There was even a handgun in the hallway of the home.

Parents, teachers and students said they were afraid to be on campus.

"This is our school. This is where we come to learn. This is the one spot where every student should feel safe there," student Fernando Aguilera said.