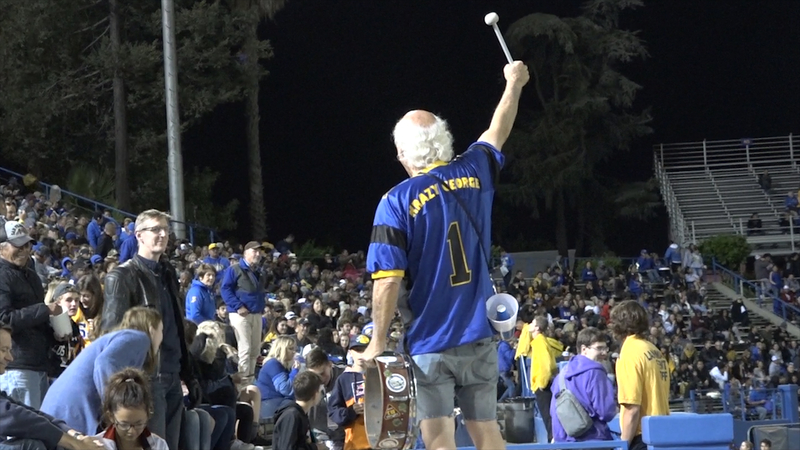 Meet the inventor of The Wave, 'Krazy George'

SAN JOSE, Calif. -- There may be no other cheer in the world that can get tens of thousands of fans involved quite like The Wave. It's been around the world at soccer, baseball and football games. But do you know where it all began?

"It's me!" George Henderson said. "I invented The Wave on Oct. 15, 1981 at the Oakland A's and New York Yankees playoff game. That's where it started."

Game 3 of the 1981 ALCS was the first time it was nationally televised, but the idea actually came when "Krazy George" was at a San Jose State football game.

Happy Krazy George Day! 38 years ago today, this @SJSU Alum created one of the most famous celebrations this world has ever seen at an @Athletics vs. #Yankees ALCS Game. The cheer was the Wave and it all started with this man who still has crowds doing it today! pic.twitter.com/Q18zHS6uPW

He watched as the fans cheered "San! Jose! State!" in three different sections, standing up while yelling.

Henderson then got the idea of getting all sections to stand in order like a wave.

After some practice at smaller venues, The Wave was ready to be unleashed to the world.

"When I introduced it to the world, nobody at the Oakland A's game knew about The Wave," he said. "I took three sections and organized them. After I told them all to stand up and it goes down the line, it will die. Why? Because people down further don't know it's coming. So I told the fans that if it stops, to boo. This is the secret because it gets people mad. I started The Wave with three sections, it went about seven sections and died. By the fourth time, it swept around the whole place through all three decks with even more energy. It was like a freight train coming to us and we kept it going. It was fun! It kept going and going, what a game that was. That's where it was filmed, that's where it was born and I have video of it."

While the first officially televised Wave cheer happened at the Oakland Coliseum, Krazy George said the idea was born at CEFCU Stadium at a @SanJoseStateFB game. The Spartan Hall of Famer still comes to SJSU games to get the fans fired up! pic.twitter.com/Pf3tzytpdQ

Now, The Wave is as normal as lines on a football field.

However, the origins of The Wave have been debated by others who claim to have started the cheer.

Most notably comes from the Northwest.

The University of Washington claims to have created The Wave, despite the fact that their first recorded occurrence was two weeks after George's.

Their reasoning is that their Wave was more of a true fluid wave, while his was more halting with sequential sections just standing up.

"Krazy George" disagrees, "You heard the University of Washington claims? Listen to this, people, two weeks later they claim that they started it after it was nationally televised. Two weeks? Get a calendar people. Two weeks is after I did it."

Who started the Wave is actually a highly debated subject between Krazy George and the University of Washington. The Huskies claim Krazy George's first wave didn't flow as a wave should. His response? Check the calendar and the tape. #KrazyGeorgeDay pic.twitter.com/g0FSUkuvaY

While the debate rages on decades later, so does the fire for sports inside of his heart.

Before George became "Krazy George," he was a National Champion Judo team member and a cheerleader at San Jose State University.

This is where his love for crowd involvement was born.

After graduating, he wanted to continue his fandom in a professional manner.

It all started with a drum.

"A friend brought a drum and a bugle to a game and I couldn't play the bugle," he said. "So he handed me this drum and it started from there. I've cheered for more than 100 professional teams in front of more than 25 million fans. I was with the Houston Oilers, the Vikings, the Chiefs and the Edmonton Oilers up in Canada. I've done hundreds and hundreds of different places, it's been fun!"

It's not just local sports that Krazy George has had an impact on. He has worked for many NFL teams that brought him in as a professional cheerleader to make noise. In fact, he made such an impact, Chuck Noll and Terry Bradshaw openly blamed him for a loss to Houston! pic.twitter.com/vao0BJcLOI

"Krazy George" is known for his Wave cheer, but remembered for the impact he has on the game.

He shares story after story about how his cheering led to the mishaps of the opposing teams in clutch situations.

In fact, many of those teams hired "Krazy George" after seeing how loud he could get the fans in a stadium.

Now, it's back to where it all began for him at his alma mater of San Jose State.

Current Spartans Head Football Coach Brent Brennan says he loves to have such a legend cheering on his team.

"He's just such a diehard and his enthusiasm is contagious," Brennan said. "Every section that he goes to in our stadium goes nuts when they see him. I've known 'Krazy George' my whole life. My mom was a cheerleader with him here. He's just been such a fun part of my life that way. Now, to be in this role where I'm on the field with our team, he continues to keep our crowd's energy high. Now that he's on the backend of his career, he's back at home where it all began. He's cheering on his alma mater."

While Krazy George has made an impact with teams across the country, his impact with @SanJoseStateFB and @SJSUAthletics continues to be important to the Spartans. A member of the SJSU Hall of Fame, Krazy George brings energy to the games and it's something @CoachBrennan loves! pic.twitter.com/yk0tQHZlt0

"Krazy George" has been cheering for sporting events around the country for more than 50 years.

Now in his 70's, he continues to meet fans young and old who all want to get their picture taken with a living legend.

"I've had a lot of people try and do what I do and copy me," he said. "They can't. I don't know why. For some reason, when my friend gave me the drum, I have this inner drum and it matched the drum he gave me. For some reason, my personality and the drum all came together and I know instinctively when to do the cheers to get the maximum effect and get the fans to make a difference in the game. That's why other teams hire me after I cheer against them. After they hate me, they remember what I did to them."

It's fair for many to believe that a man of his age has plans of handing in his famous cut-off shorts, putting down the drum and walking off into the sunset of retirement.

But that's not on his mind.

"Krazy George" has changed the game and he plans on watching sports for as long as he can.

Because he loves it.

"I don't plan to stop," he said. "I plan on cheering for San Jose State and probably any of the other local Bay Area teams. I'll show up forever. As long as I can walk and carry a drum, have drum will travel. I will be there because it's fun, I love what I do and I think the fans still love what I do."