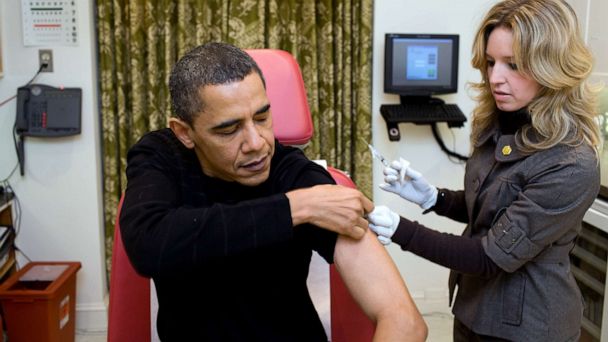 Three former presidents said this month that they would get the coronavirus vaccine publicly in order to boost Americans' confidence in the vaccine's safety.

"I may end up taking it on TV or having it filmed, just so that people know that I trust this science, and what I don't trust is getting COVID," former President Barack Obama said during a SiriusXM interview.


Through spokespeople, former Presidents George Bush and Bill Clinton, confirmed to CNN and ABC News that they would also get the vaccine on camera if it would help encourage Americans to get vaccinated.

On Friday, Vice President Mike Pence was vaccinated for COVID-19 during a live television event at the White House. His wife, Karen Pence, and Surgeon General Jerome Adams also received the vaccine. Adams had previously talked about vaccinating high-profile individuals, like presidents and public health officials, during an interview on "Good Morning America." "There's a symbolic part of someone like me getting vaccinated," Adams said.

Offers to get vaccinated publicly isn't just political theater, according to Noel Brewer, a professor of health behavior at UNC Gillings School of Global Public Health.

While researchers believe that confidence in vaccines leads to more people getting vaccinated, increasing that confidence is tricky, Brewer explained. "What is very effective is having leaders stand up for the vaccination system and for individual vaccines," he said. "Having them offer to get vaccinated on camera is one of the single most important things that could happen."

It's also a move with historical precedent.


In 2009, Obama rolled up his sleeve for White House photographers while getting the H1N1 vaccine. "People need to understand that this vaccine is safe," he told American Urban Radio Networks at the time. "Michelle and I just got the shots ourselves," he said. "We wanted to make sure nationwide that children were getting it before adults did. And now there's enough vaccine so that adults should get it as well."

President Gerald Ford similarly rolled up his sleeve on camera as part of his 1976 campaign to vaccinate everyone in the country after swine flu was detected at a New Jersey military base. But Ford's campaign involved fast-tracking a vaccine during an election year. When no pandemic came to pass and 30 people out of the 40 million vaccinated died from adverse reactions to the vaccine, the Centers for Disease Control and Prevention's credibility suffered.

While Ford is a cautionary tale, Brewer pointed out that there can be damaging consequences when leaders don't stand up for vaccination.

A study Brewer published last year in the journal Vaccines, found that when authorities in Denmark were slow to respond to news stories that questioned the safety of the HPV vaccine, vaccine uptake among girls fell 14%.

Although the Danish authorities eventually stepped in, "the periods with negative media coverage left over 26,000 older girls unvaccinated who would have otherwise received the vaccine," Brewer and his co-authors wrote. "The missed doses may, over time, translate to as many as 180 avoidable cervical cancers and 45 deaths."


In the end, combining strategies, like low-cost and accessible vaccination programs coupled with trusted public figures getting vaccinated themselves, works better than any single approach.

"The bottom line is that this is really good news," Brewer said of the former presidents' vaccine pledge.

"Trump getting vaccinated would also be very productive," he added.