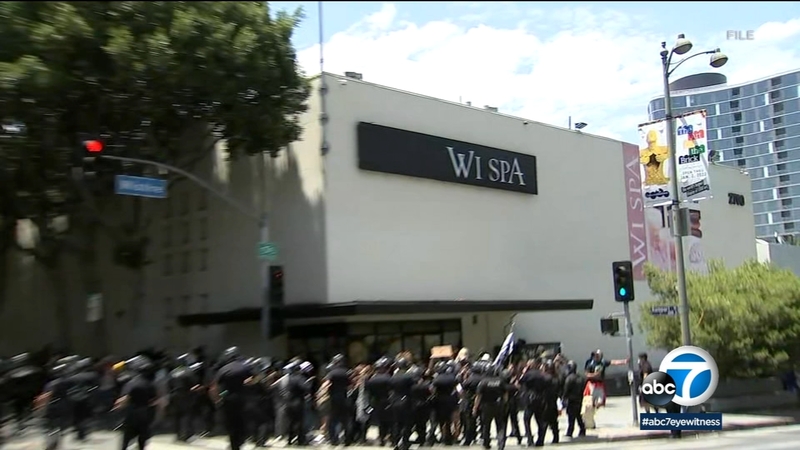 KOREATOWN, LOS ANGELES (KABC) -- A person who identifies as a transgender female who is at the center of a controversial incident at a Los Angeles spa has been charged with multiple counts of indecent exposure.

Darren Merager, 52, of Riverside County, has been charged with five felony counts of indecent exposure, according to the Los Angeles County District Attorney's Office.

Merager has been a registered sex offender since 2006 due to indecent exposure incidents in 2002 and 2003, according to the DA.

A search of court records shows more than 40 cases of various types under Merager's name filed in courthouses around Southern California, dating back at least three decades.

The controversial incident happened on June 23 at the Wi Spa in the 2700 block of Wilshire Boulevard.

Police say five people came forward to report an incident of indecent exposure at the spa.

Although Merager identifies as female, several women at the spa said Merager was exposing male genitalia in the women's section of the business.

A video circulated online shortly after the incident in which an irate customer complained to the spa staff about the exposed genitalia.

At the time, Wi Spa defended the customer's right to be at the facilty. The spa gave a statement to Eyewitness News which read in part: "Like many other metropolitan areas, Los Angeles contains a transgender population, some of whom enjoy visiting a spa. Wi Spa strives to meet the needs and safety of all of its customers, and does not tolerate harassment or lewd conduct by any customer, regardless of their sex, gender, or other characteristic."

The incident triggered protests from the transgender community as well as counter-demonstrations.

At one point there were some altercations between the two groups and police had to use force to separate and disperse the crowd. Attorneys representing 10 injured demonstrators later filed excessive-force claims against the LAPD.