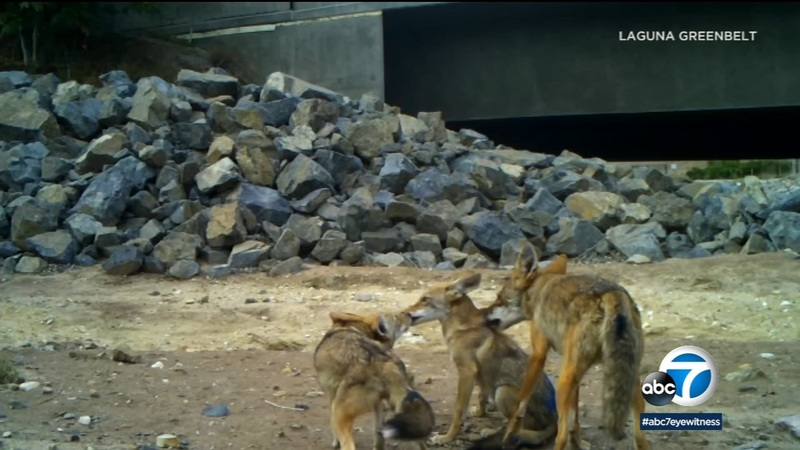 IRVINE, Calif. (KABC) -- Environmentalists hope improvements to a portion of a wildlife corridor connecting the Santa Ana Mountains to the Laguna coastal wilderness will allow species near the coast to repopulate in the area, decreasing their risk of extinction.

John Foley is a board member with Laguna Greenbelt.

Foley said the changes going into the 2.5 mile stretch running through Orange County Great Park are a win for habitat restoration advocates.

A video from Laguna Greenbelt showing coyotes playing near the Irvine Spectrum was part of a two year study.

The finding was animals weren't crossing the entire six-mile corridor connecting the Santa Ana Mountains to the Laguna coastal wilderness.

"Urbanization and things like the 5 Freeway have led to a fragmentation of the landscape that's put the coastal wilderness on a bit of a bio island," Foley said.

Coyotes, raccoons, possum, great blue heron, road runners and bobcats were among the species struggling to repopulate near the coast. Biologists said this leads to inbreeding depression and ultimately extinction.

Lynn Jochim is the Co-Chief Operating Officer with Five Point.

"We spent a lot of time with Laguna Greenbelt and their experts making sure that how the entire wildlife corridor was laid and how it is being developed was done in a way that was sensitive to the fact that the protection of both the species that would be traveling through the corridor and anybody visiting the Great Park or visiting any of the communities adjacent to it," Jochim said.

Wildlife advocates said Five Point did an excellent job in the development of a tunnel along it's 2.5 mile stretch because there was great visibility, which is very inviting to wildlife.

Foley pointed out there weren't any sharp edges or barriers that possible predators could hide behind.

Completion of the Five Point corridor upgrades may come as early as 2021.