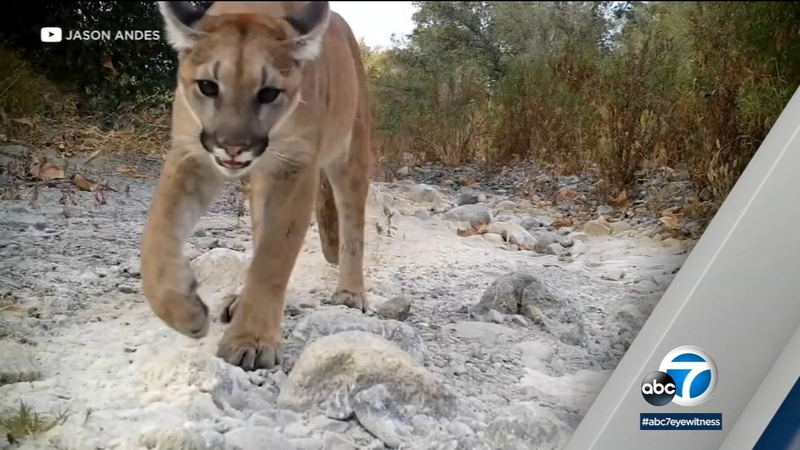 LAKE FOREST, Calif. (KABC) -- It's easy to sometimes forget we're surrounded by wildlife in Southern California. But thanks to Orange County photographer Jason Andes, we're now getting a behind-the-scenes look at our animal neighbors.

"I capture wildlife at its best, when nobody's watching. There's no human presence. It's very non-invasive," said Andes.

For the last six years, Andes has been tracking a number of different animal species in Orange County's Santa Ana Mountain range: everything from deer, to eagles and mountain lions.

"Once I got my first mountain lion on camera I kind of got hooked and couldn't look back," said Andes.

Only 15 mountain lions are estimated to live in the Santa Ana Mountain range.

"I've tracked a total of eight different mountain lions in Orange County, three of them being newly born kittens, about 6 months old now. So it's very exciting. Every time you go check a camera there's always something new and exciting to look forward to," said Andes.

Recently, a 5-year-old male named Scar or El Cobre, was illegally shot and killed. Andes says the killing of a reproductive male could have devastating consequences to maintaining balance there.

The California Department of Fish and Wildlife is now investigating.

Andes has 10 motion-sensor cameras placed throughout the mountains, allowing him to shoot photos and video. He checks his footage weekly, and says photographing these moments is a true passion.

"Being outside you kind of cleanse yourself from your day to day humdrum and you get out to see magnificent animals, nature, clean air," said Andes.