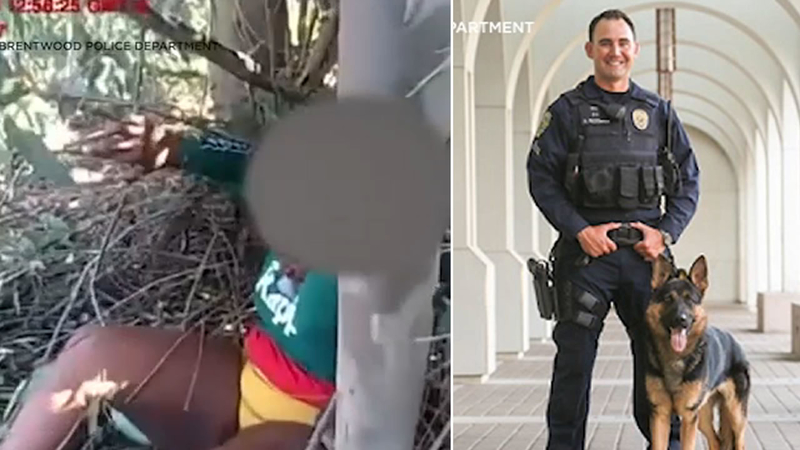 BRENTWOOD, Calif. -- There are new details in the case of a Brentwood Police Department canine that ripped the scalp off a woman suspected of shoplifting. She's suing the police canine handler and city.

The police body camera video is so graphic at times, ABC7 News has blurred it.

On February 10, 2020, Talmika Bates admits she shoplifted from a Brentwood Ulta Beauty.

According to the police report obtained by the ABC7 News I-Team, Bates and two others stole approximately $10,000 worth of perfume.

"I was just a regular person like everybody else, trying to make away and it escalated," said Bates.

Bates was in a getaway car with the other suspects that rammed a police cruiser, according to the police report and seen in dashcam video.

The suspects later ditched the car.

Police apprehended one suspect hiding in a garbage can, according to the police report. She called the others on speaker on her cellphone, who explained where they were hiding while an officer listened.

"Girl, in a bush and this boy keep looking at us," said one of the suspects.

As Bates says she hid in the bushes, Brentwood Police Department canine Marco and his handler Officer Ryan Rezentes found her.

"The dog is biting me," Bates could be heard screaming in police body worn camera video.

"I just feel something attacking me, like paws on my back, then I start feeling rips from the scalp here, here, here and teeth grinding," Bates said, pointing to her head during an interview with ABC7 News.

"I thought I was going to die, I really did," she continued.

"Mama, my whole brain is bleeding, mama," she can be heard screaming in the video.

In a statement, the Brentwood Police Officers Association says police dogs are often used to search these types of areas because a potentially armed suspect can conceal themselves in overgrown vegetation.

According to the police report, Officer Rezentes writes, "When Marco locates the source of human odor and if he comes into contact with the subject, he is trained to bite the first portion of the body he contacts with or without a command. Marco will hold that suspect until I release him."

"No warning, no come out with your hands up, that would have been better for me, take me to jail," said Bates in her interview with ABC7 News.

Officer Rezentes writes, "The search command was the only command given, which is standard from my training and experience for an open area search."

He writes in the police report, "A police canine warning was not given because I had no indication there were any suspects in the area."

He writes when he heard someone shout something similar to "get the dog off," he began calling for Bates to come towards him and to "bring me the dog." Without compliance, he writes he made his way towards her and "took Marco off the bite."

"All over perfume and cosmetics," said Bates' attorney, Adante Pointer.

Pointer has filed a lawsuit on Bates' behalf against Ryan Rezentes in his capacity as a police officer for the city of Brentwood.

"We want to bring attention to this officer and this out of control German shepherd," said Pointer.

"Neither one are fit to serve the community that it's sworn to protect," Pointer continued.

"I didn't know the dog was going to bite me though," Bates can be heard saying in the video.

"Well you shouldn't run from the police," an officer responds.

The city would not say why the police department is not currently deploying a K9 program since April 2021.

Surgeons were able to reattach Bates' scalp but she says she still has nightmares, memory loss and depression.

"I want the dog to be laid down, I want him to be fired, I want justice," said Bates.

For a look at more stories and videos by the ABC7 News I-Team go here.