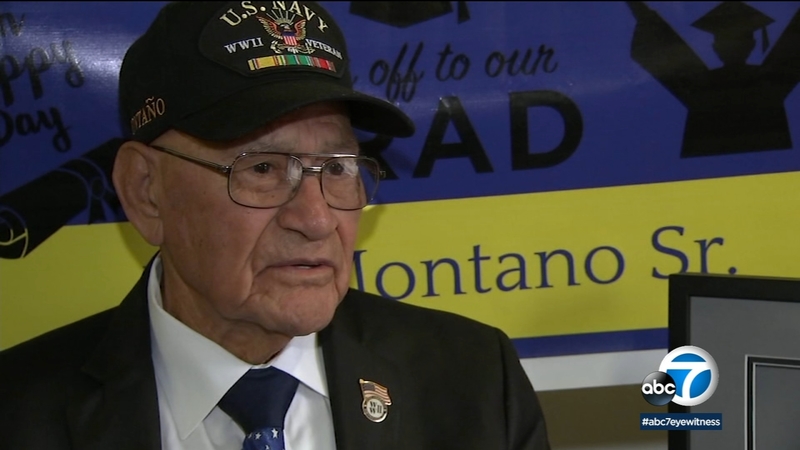 PLACENTIA, Calif. (KABC) -- A high school diploma nearly eight decades late, but never forgotten, finally made it to the hands of a World War II veteran on Friday.

Phil Montano said while preparing for the ceremony that he missed a lot during his three years serving in the Navy.

"I went up to 11th grade and that's when they yanked me out of there to go to war," Montano said.

He remembered getting his assignment for the 300 men on his ship. Montano said he was just a kid and scared.

Luckily, he received the proper training and, like many who serve, was able to work.

"It's my job now. I have to do what has to be done," Montano recalled. "I became a man with responsibility right after that happened."

What didn't happen was his high school graduation.

"That diploma has been something that has been in the back of my mind," he said.

Montano's grandson, P.J., saw to it that the war vet received the long-overdue diploma.

"From that it escalated to this," Montano laughed, looking around a room filled with dozens of relatives and Placentia Yorba-Linda Unified School District staff.

His eyes filled with tears and gratitude, complete with a Yaqui ceremony honoring his Native American roots. With his loved ones and Valencia High School students cheering him on at the age of 94, the father, grandfather and veteran became a proud high school graduate.

Minutes before his commencement, Montano read a letter that he had written to thank his grandson and all those who helped him get his diploma.

"Because a group of people cared and they made a veteran of World War II extremely happy, may our Lord Jesus Christ bless all of you. Thank you," Montano read.

PYLUSD staff hope to graduate more veterans of WWII, the Korean and Vietnam wars, as well as former students interned during WWII who may have missed their graduations.