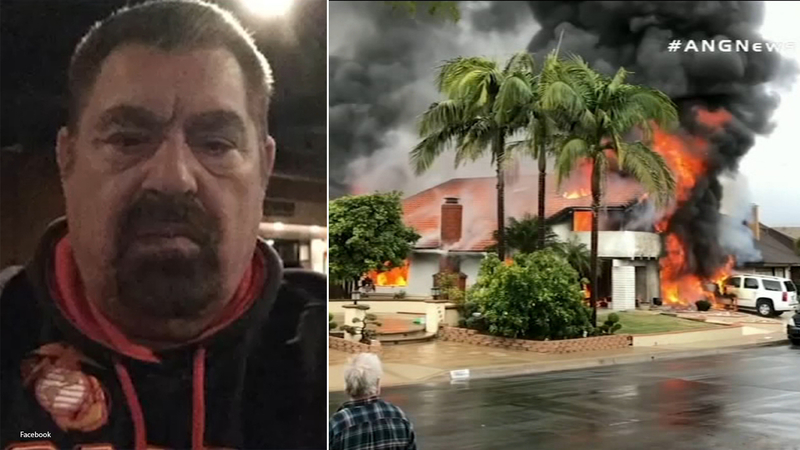 YORBA LINDA, Calif. (KABC) -- Witnesses say the residents of one of the homes set ablaze in the plane crash in Yorba Linda were hosting a Super Bowl party at the time of the fatal wreck.

The small plane lifted off from Fullerton Municipal Airport shortly after 1:30 p.m. Sunday. Authorities said the pilot flew the 1981 twin-engine Cessna 414A about 10 miles before he encountered some sort of midair issue. That's when the plane crashed into a Yorba Linda neighborhood.

Authorities said the aircraft climbed about 7,800 feet before making a sudden decline down. The Orange County Fire Authority said there were at least two active structure fires at the scene on Crestknoll Drive near Canyon Drive.

In that home, four people were killed - two men and two women - and two others were hospitalized. The man flying the plane also died in the crash. At an afternoon press conference Monday, Orange County sheriff's officials identified the pilot as 75-year-old Antonio Pastini, a retired Chicago police officer from Gardnerville, Nevada.

Officials said the coroner is in the process of identifying the four other deceased victims through DNA.

Witnesses said that's the home where the Super Bowl party was being held. Witnesses also said they saw people escaping that home, screaming for family members they couldn't find.

A witness' video shows the two-story home engulfed by a massive inferno as horrified neighbors look on and two explosions are heard.

One neighbor, Tony Tomminelli, said he heard an explosion from up above.
EMBED More News Videos

Another neighbor, Dave Elfver, described the incident as being unbelievably loud before hearing an explosion. He said he ran outside and saw part of an engine and propeller across the street.

Other debris from the aircraft was scattered on nearby rooftops. National Transportation Safety Board officials said the debris field was about four blocks long, and the fuselage went down a hill, into another house.

NTSB officials arrived at the scene Monday morning to continue the investigation.

According to NTSB investigator Maja Smith, many witnesses reported seeing the wings fall off before the crash happened. She said neighbors' videos and witness statements are helpful to the investigation.

"Because there are all these people around, all these witnesses, we are getting information that if the accident happened on the side of a hill, I wouldn't have because we wouldn't have any witnesses," she said.

Smith said NTSB investigators are still searching for the right wing of the plane and added that the wreckage is one of the largest debris fields she has investigated.

Dealing with the aftermath of the wreck has been emotional for some longtime residents.

"It's just so hard for everybody. I feel so sorry for these people," cried neighbor Catherine Paulson. "I mean, anything can happen. It could have hit any of these houses."


The NTSB plans to remove the wreckage by the end of the day. An initial report on the cause of the crash is expected in the next five to 10 days. It may take up to one year to get a full report into the cause of the deadly crash.