KABC
By Sid Garcia and ABC7.com staff
LOS ANGELES (KABC) -- Los Angeles police and devastated family members on Thursday announced a $50,000 reward for information leading to an arrest of the person or people responsible in a suspected car-to-car shooting that left a driver and skateboarder dead in Baldwin Village.

The shooting happened about 8:30 p.m. Monday in the 5000 block of West Rodeo Road, near Dorsey High School.

Authorities said the shooting set off a chain reaction. A driver was shot by a suspect in another car. The victim's vehicle then hit a skateboarder, identified as 22-year-old Laroyice McFarland.

As the suspect was speeding away, the vehicle struck and critically injured a male bicyclist at Farmdale Avenue and Exposition Boulevard, police said.

The driver who was shot was identified by coroner officials as Harrison Kristol, 20, of Los Angeles, who died at the scene. The bicyclist who was struck was in serious but stable condition, authorities said.

LAPD officials and family members of McFarland were asking anyone with information that could lead to the identity of the suspect to come forward.

"He was a great person," his mother Shari Seawright said. "He never harmed anyone. He would give you the clothes off his back. He just was skating, that's all he did, that's what he loved. I'm just asking for someone, if anyone knows anything, please help us."

The LAPD said it does not have a description of the suspect vehicle.

"What I really wanted to appeal to the community was on that night, in this one incident, we lost a 22-year-old, we lost a 20-year-old and an 18-year-old is in serious condition based on a single incident of gun violence," LAPD Assistant Chief Dennis Kato said.

The reward was offered by the city of Los Angeles. 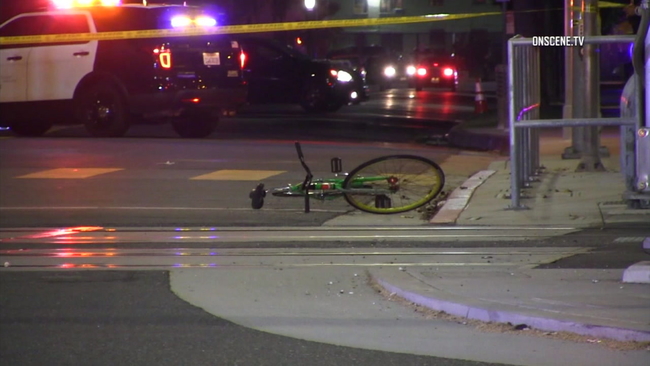