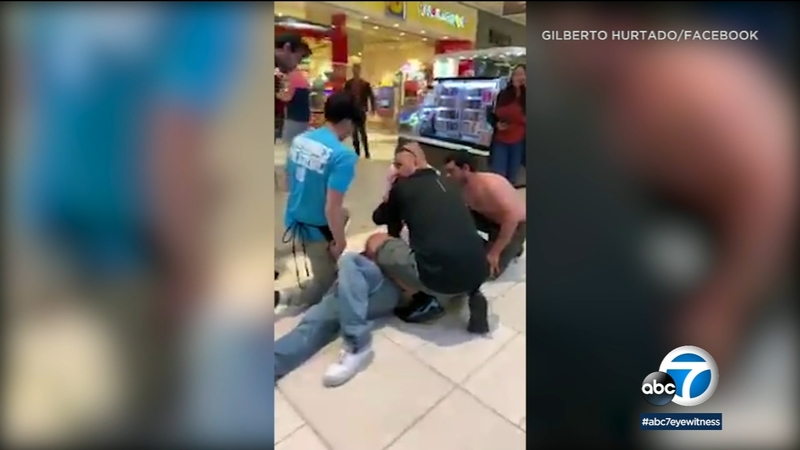 TORRANCE, Calif. (KABC) -- One person was shot at Del Amo Fashion Center in Torrance on Monday, and a search for a suspect is underway.

Torrance police officers responded to shots fired calls shortly before 3 p.m. at the mall, which is located at 3525 Carson Street, police said.

Upon arrival, officers found one person with a gunshot wound. He was treated by firefighters inside the mall and transported to a nearby hospital. Authorities said he's expected to survive.

Video from inside the mall shows the wounded man on the ground and bloody. He appears to be alert as people are gathered around him, trying to help. It's unclear whether the victim is a mall employee or a customer.

AIR7 HD was over the scene as dozens of officers swarmed the area, which was placed on lockdown.

A worker at Panda Express inside the mall recalled the terrifying moments right after the shooting.

"I just saw about 100 people just run out and then I heard somebody say, 'Someone has a gun,' and I didn't know what was going on and then so we all just went out...I tried to go, like, half an hour later, and they were like, 'Oh, the shooter is still on the loose.' It was a very scary feeling," said Alba Mejia.

The lockdown was lifted shortly before 10:30 p.m., according to Torrance police, who tweeted, "The mall has been searched and cleared. All police units are clearing the area and all citizens are clear to pick up their vehicles from the area."

The lockdown at Del Amo Fashion Center has concluded. The mall has been searched and cleared. All police units are clearing the area and all citizens are clear to pick up their vehicles from the area.

Detectives are conducting a follow-up investigation to identify the suspect in the shooting.

A preliminary investigation reveals the suspect may be a Hispanic man between 20 and 25 years old with a shaved head, black shirt and checkered shorts.

A motive for the shooting is still not known.