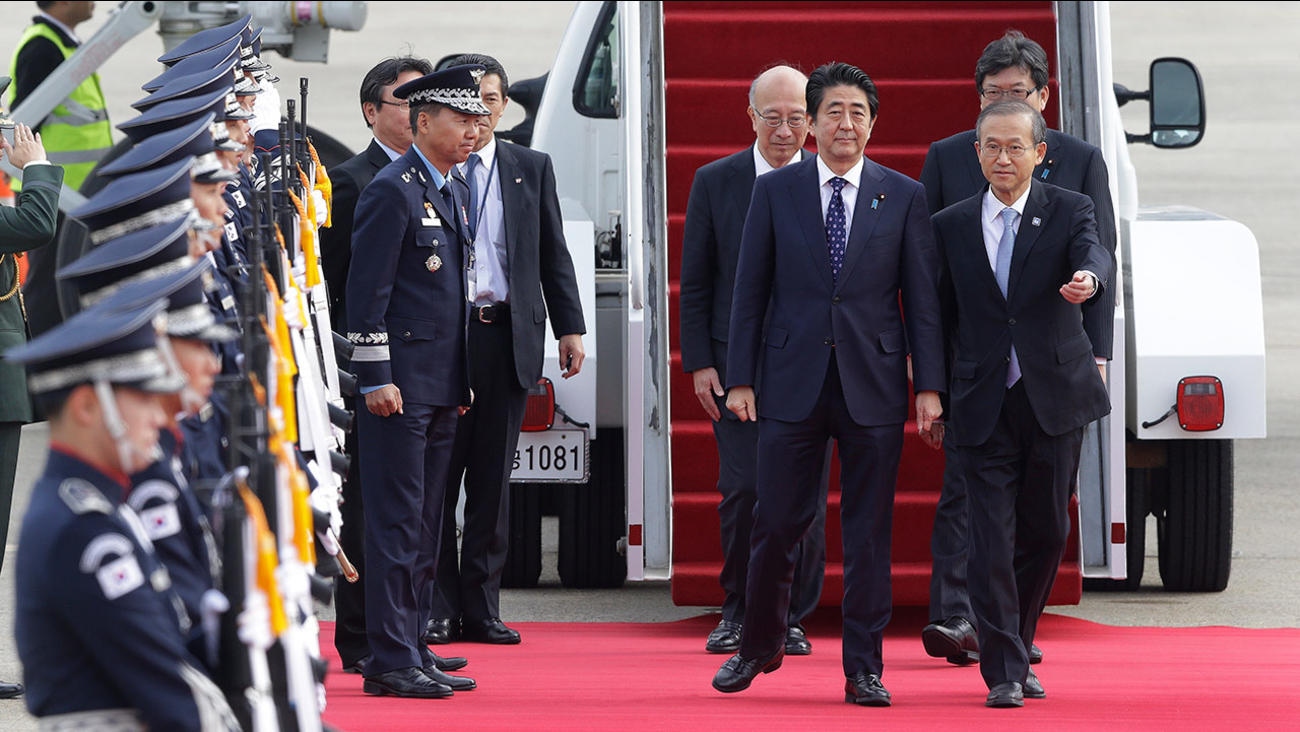 SEOUL, South Korea -- After a three and a half year freeze, the leaders of South Korea and Japan resumed formal talks Monday that were expected to focus on North Korea's pursuit of nuclear bombs, trade ties and a long-running dispute over Japan's wartime atrocities.

Relations between Japan and its two Asian neighbors have been shaky since Abe, who takes a more hawkish, nationalistic stance than many of his predecessors, took office in late 2012. Seoul and Beijing believe that Abe seeks to obscure Japan's wartime brutality against Asia.

No breakthrough was expected after Monday's meeting, and nothing major came from Sunday's three-way summit in Seoul. But just sitting down together is a step forward after the gap in such meetings, which used to be an annual affair. A joint statement said the three agreed Sunday to try to resolve history-related issues by "facing history squarely and advancing toward the future" and boost exchanges and cooperate on economic, cultural and other sectors.

On Monday, Park and Abe held initial talks for about 30 minutes and then went into expanded talks involving their top aides and senior officials, according to Park's office.

"I hope today's meeting will have ... sincere talks to heal the painful history and serve as a precious opportunity to develop bilateral ties," Park said at the start of the expanded talks.

Abe replied he wants to work with Park to map out a new future between the countries.

Since taking office in early 2013, Park had resisted formal talks with Abe until Monday's meeting at her presidential Blue House in Seoul, though U.S. President Barack Obama brought them together in an informal meeting in The Hague, Netherlands, last November.

The last two-way summit between the leaders of Japan and South Korea happened in May 2012, when Park's predecessor, Lee Myung-bak, met with then-Prime Minister Yoshihiko Noda.

On the agenda is the emotional issue of Korean women forced to serve as sex slaves for Japan's Imperial Army troops. In the face of repeated protests by Beijing and Seoul, Abe was forced to abandon his earlier plans to revise Japan's 1995 apology over its wartime aggression and an earlier apology to so-called "comfort women." Japan has apologized many times before, but many South Koreans see the statements as insufficient.

Although Abe wasn't expected to make a major concession on history issues Monday, Park has faced calls at home to improve ties with Japan.

South Korea and Japan together host about 80,000 U.S. troops, the core of America's military presence in the Asia-Pacific. Washington wants to solidify its alliance with the two countries to better deal with a rising China and a North Korean threat.