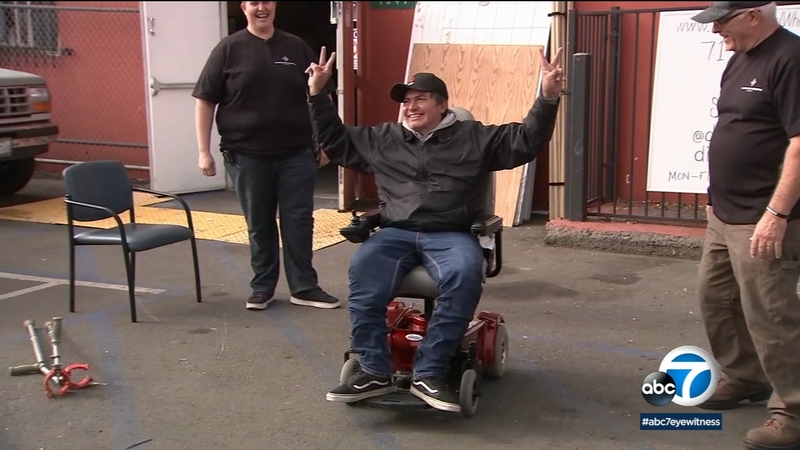 SANTA ANA, Calif. (KABC) -- Police in Santa Ana are looking for the driver who hit a man in a motorized wheelchair last weekend as he was going home.

It happened on the morning of Sunday, Nov. 28. Jose Guzman was on his way home when the driver hit him.

"He said he fell onto the sidewalk ... he didn't think anybody had seen him," said Cpl. Maria Lopez with the Santa Ana Police Department. "He started screaming for help."

Guzman wasn't severely injured, but the impact of the crash broke his wheelchair. He hasn't been able to leave his home since the incident.

As the investigation into the incident began, Lopez said an employee with the department reached out to Michael Rush, the co-owner of a wholesale company in Santa Ana called Diversified Wholesale, to see if he could help.

Rush quickly looked through his inventory and found a motorized wheelchair that was perfect for Guzman.

"We're very happy that we were able to do this and we have this business and we're able to give and help the community," said Rush, who was there when he and his team surprised Guzman with the wheelchair.

Meanwhile, police are still looking for the driver involved. Lopez said the driver was seen behind the wheel of a dark-colored truck.

Anyone with information is urged to contact Santa Ana Police.