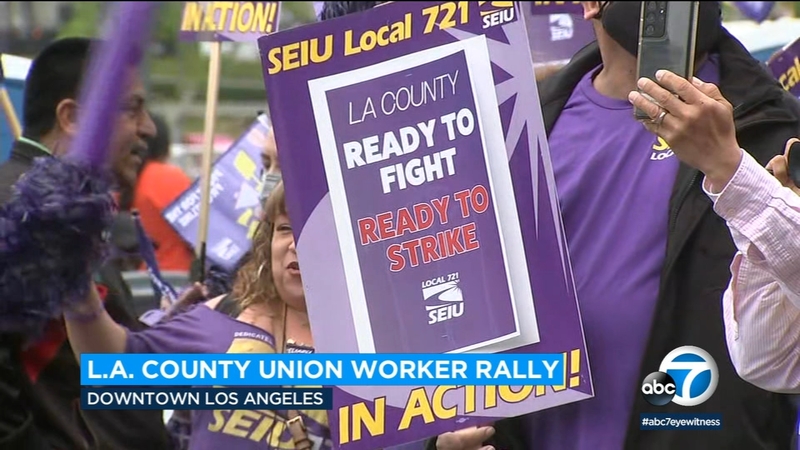 LOS ANGELES (KABC) -- Los Angeles County union workers, including employees in health care, library administration and public works are on the verge of a strike.

Hundreds rallied at Grand Park where members gathered to have their voices heard.

SEIU Local 721 represents 55,000 L.A. County workers, many of them in health services. Their contract with the city expires at midnight Friday.

Workers want a pay raise that is more than 2% of what the county has offered, as well as increase in health and other benefits.

California lawmakers voted Thursday to extend a law that protects renters just hours before it was scheduled to expire.

The workers spoke out against what they consider county leadership's insulting contract proposals, which many describe as a "slap in the face" to those manning the frontlines of the COVID pandemic, especially amid historically high inflation.

"We've had such a horrific pandemic," Dr. Ileana Meza of the union negotiating team said. "We've lost so many county employees who were dedicated, who came to you work everyday. While the world closed down, county employees came to work every single day to provide vital services to our most marginalized and vulnerable population of Los Angeles County residents."

Union leadership say they do not want a strike, but if they do not get a fair contract, that's an measure they are willing to take.

The rally also drummed up support for a strike authorization vote, if need be. Those results will likely come out in next two or three days.