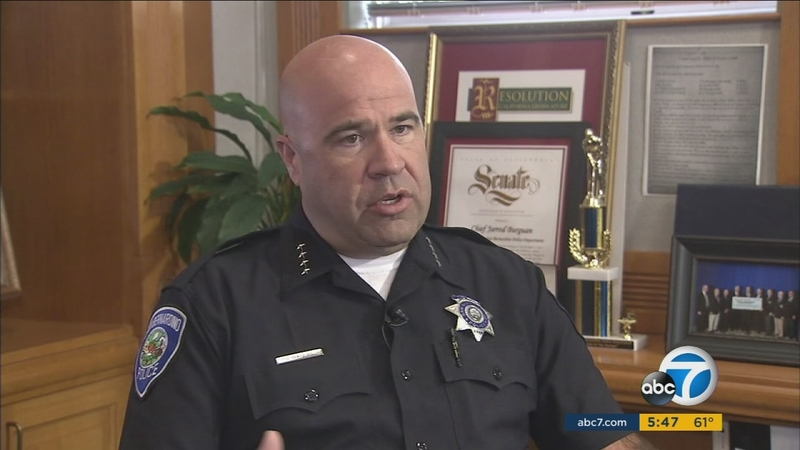 SAN BERNARDINO, Calif. (KABC) -- As everyone looked for answers in the immediate aftermath of the San Bernardino terrorist attack, many turned to Chief Jarrod Burguan to relay the information his department was gathering.

Burguan was no stranger to the cameras, having served as a lieutenant and the public information officer for the San Bernardino Police Department just a few years prior to the attack.

But after a news conference on Dec. 2, 2015, Burguan became known as the police chief of the city that, for a while, was the site of the deadliest terror attack on U.S. soil since 9/11.

Sitting down with Burguan one year later, ABC7 asked him about what went right for law enforcement that day as well as everything that didn't.

"I know there's a little bit of debate about the militarization of police departments, and the types of equipment we buy, but it was these very types of incidents that really highlighted some of the shortcomings," Burguan said.

Burguan said when his officers stormed the Inland Regional Center they were outgunned.

"The initial guys who went into the building, the first team, nobody had a rifle on that team," Burguan explained.

A year after the attack, nearly every unit with the police department now has a rifle.

Burguan also talked about the need for police to use an encrypted form of communication on the police radio system.

"At one point, it's my understanding that we had somewhere in the neighborhood of 300,000 people around the world basically listening to our radio channels live," Burguan stated. "Which I understand that may be valuable from a transparency standpoint, but it's a little unsettling to the officers in the field who are trying to communicate."

"I think that the country is eagerly awaiting, and this community and every other community is eagerly awaiting to see if those were statements made by the candidate Trump, and whether president Trump might be a little bit different or implement some different policies, or if he's really going to follow through with that," Burguan said.

But Burguan also said he doesn't believe the federal government will change the outlook of his department.