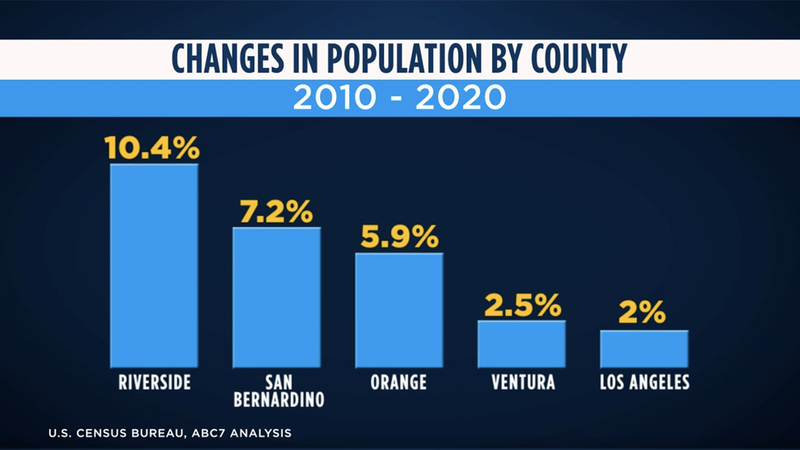 LOS ANGELES (KABC) -- The U.S. Census Bureau released the results from the 2020 Census Thursday, showing the slowest national population growth since the 1930s. But in Southern California, the population is growing faster in less urban cities and counties.

"It is normal for countries like the United States to experience both booms and then periods of slow growth," said Matt Barreto, a professor of political science and Chicano studies at UCLA.

Barreto said the slow is due to the nation's older population.

In the southland, it was Riverside County that saw the most growth over the last decade, increasing by 10.4% between 2010 and 2020, according to an ABC7 analysis of the newly released Census data.

San Bernardino County saw the next highest increase at 7.2%, followed by Orange County at 5.9%, Ventura County at 2.5% and finally Los Angeles County at just 2%.

According to Barreto, one of the reasons for the larger increase in the Inland Empire is housing affordability.

"It's not surprising to me, I think, from a demographic standpoint that you're seeing that population growth," he said.

The city of Irvine saw the largest population growth among cities in California with more than 50,000 people. Increasing 45% between 2010 and 2020, the city was also in the top 10 fastest growing cities in the United States.

Lake Elsinore was the next fastest growing city in the state, at 36%. Menifee increased 32%, and Eastvale and Santa Clarita increased by 30% between 2010 and 2020.

"People are moving to where there are houses and I think that's an important public policy implication for California, is to continue talking about the housing issue here in our state," he said.

Table not displaying correctly? Click here to open in a new window.

The Census faced challenges in 2020. Not only was there a first-time shift to an online format, but the COVID-19 pandemic created challenges with following up with non-responders. Barreto said there was also a lot of fear among undocumented populations about being counted.

"Did we have a slight undercount because either the technology that was rolled out, the pandemic or these fears and concerns in immigrant communities? Did that cause some households to not respond to the census? And if so, what are the implications?" asked Barreto.

California already lost a congressional seat, and a lot of federal money is tied to the census. The data released today will also be used to draw new congressional district boundaries.

"It's very important that we don't overly politicize this. It should just be an accurate count of all households across the entire country and across our entire state," Barreto said.

He also said the population shifts could lead to more representation for fast-growing populations of color.

"The districts have to be drawn around where the population is, and so, if the Latino, Asian, suburban, exurban population, if that's where the growth in the state is, that's where we should see new representation. So that those communities, which are growing, we want to make sure that they have an equal say and equal representation, whether it's in Sacramento or Washington D.C.," Barreto said.

In all five Southern California counties, the share of the white population dropped, while shares of other race and ethnicities increased. It was most pronounced in less urban counties.

"I think one of the things that's happening in California is similar to what's happening nationally, and that is that the suburbs as a region are getting much more racially and ethnically diverse," Barreto said.

In California, he said it's happening at a faster pace.

Policymakers and state representatives will have to respond to a more diverse population, Barreto said.