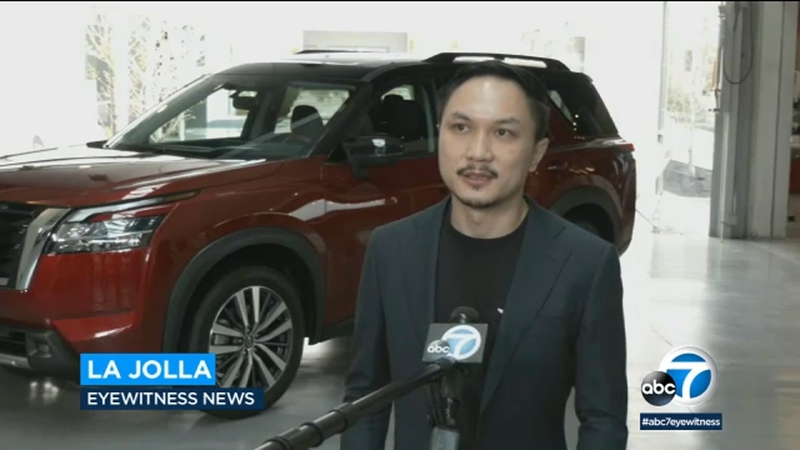 LA JOLLA, Calif. (KABC) -- As Nissan revamps its entire product line, the SUVs in its showrooms are getting makeovers left and right. Restyles from the smallest one, the Kicks, to the biggest, the V8-powered full-size Armada.

And in between, a complete redesign for one of its longest-running names, the Pathfinder. The 2022 version of the popular SUV was not just restyled, but restyled at the place where the Pathfinder literally got its start back in the '80s: Nissan Design America in La Jolla. A dream workplace for any designer, especially young ones coming right out of school.

"The idea of working in California, for Nissan, was just a dream come true," said Marcus Quach, who quickly rose to the job of senior designer at Nissan.

Raised in the Bay Area, and schooled at Pasadena's Art Center College of Design, Quach was given the task of shaping the newest Pathfinder, which gets back to the styling roots of the original. There are little hints all over the 2022 model that pay tribute to the first Pathfinder.

Being handed the task of revamping a signature vehicle carries a lot of weight.

"Definitely some nervousness with the Pathfinder. It's an icon for the brand. We wanted to do kind of an homage to the heritage of the original Pathfinder. And that was something that we really tried to infuse into this design," noted Quach.

Coming out of Nissan Design America at pretty much the same time, an all-new mid-size truck, the 2022 Frontier pickup.

That's especially significant to Nissan's California design studio, because when the state-of-the-art facility first opened in 1982, one of the initial projects to come out of it was the original 1986 Hardbody pickup.

And that iconic truck went on to set a standard, in a way. Basing designers in the U.S., where the truck would be a mainstay product, from that early one, to the newest 2022 Frontier, which goes on sale later this year.

"Just seeing the Hardbody and how far it's come, and all the evolution of six decades of mid-size pickup trucks, and that's why we're so excited to have the new Frontier," said Angela Fong, a Nissan product specialist.

So what's cooking in that rather secret place right near UC San Diego for the years and decades ahead? Well, that's a secret. But the creative people here are taking aim at vehicles for American roads, just as they've done for the past four decades.